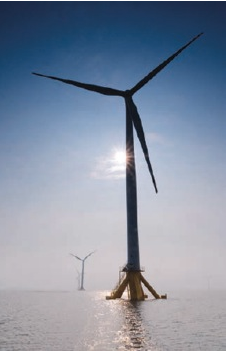 Analysts expect that China will add some 800 to 1,000 gigawatts of zero-carbon power in the next 16 years, which is more than all the coal-fired power plants that exist in China today. Image: Siemens.com/press

I could feel it in my bones. We’re at the tipping point, I thought…for both world emissions and for renewable energy.

That was in late February 2015, and within weeks the confirmation came. The International Energy Agency (IEA) announced that 2014 was the first year the world’s carbon emissions DID NOT increase, while the world economy grew 3%! In the past, there have been a few years when emissions dropped, but they were always correlated with significant economic slowdowns.

Breaking the link between economic growth and emissions is clear evidence that efforts to reduce greenhouse gases are beginning to work.

“This is a real surprise, we’ve never seen this before,” says Fatih Birol, chief economist of the IEA. And it is fantastic news leading up to this December’s World Climate Summit, which everyone’s hopes are pinned on, because nations will be heartened by the news that efforts to control emissions are working—without harming economies.

In fact, over the past five years, economies in OECD (Organisation for Economic Co-operation and Development) countries grew nearly 7%, while emissions dropped 4%, says IEA. The United States and Euro.pean Union have made significant strides on energy efficiency, renewable energy, and in moving away from coal, but China’s emissions kept rising.

But that also changed in 2014—for the first time, China’s coal production declined, causing its emissions to drop by 2%, according to the country’s National Bureau of Statistics. And that’s with energy consumption rising 2.2% and gross domestic product (GDP) growth of 7.4%. So the connection between economic growth and emissions is breaking in China too. If the trend continues, China could reach its goals early— peak coal in 2020 and energy-related emissions in 2030.

Indeed, instead of building another coal plant every week, as has been the case for 20 years, China will build the equivalent of a coal plant in carbon-free power every week for the coming decades, says Joe Romm at ThinkProgress. “That means adding some 800 to 1,000 gigawatts of zero-carbon power in the next 16 years, which is ‘more than all the coal-fired power plants that exist in China today and close to total current electricity generation capacity in the United States.’”

In the United States, GDP grew 3.9% in the third quarter of 2014—the strongest growth in over a decade—but oil consumption fell 0.3%. This year, oil demand is expected to rise 0.7%, but the economy will grow four times faster.

The United Kingdom did better. Carbon emissions dropped by a record 9.2% last year as energy demand declined 7% and GDP rose 2.6%, according to the country’s Department of Energy & Climate Change. Efficiency has been improving 3% a year since 2000, it says.

Then came the great news on renewable energy. On top of reports that solar and wind are close to or at grid parity in most U.S. states, the National Bank of Abu Dhabi (NBAD) issued this statement: “Going forward, almost all investments in the power sector will be in renewable energy…worldwide.”

“Prices have fallen dramatically in the past few years: solar photovoltaics falling by 80% in six years, and onshore wind by 40%, and within two years, they will be cost competitive in 80% of the world. The speed of this shift towards grid parity with fossil fuels means that, in many instances, perceptions of the role of renewables in the energy mix have not caught up with reality,” according to the NBAD statement.

NBAD points to the growth of the “west-east corridor” across the Middle East, Africa, and Asia, where there will be new megacities, rapid industrialization, and a growing middle class with wealth and expectations. NBAD sees this as a “huge opportunity to leapfrog to cutting edge technologies, and since most of the growth in energy demand will be for electricity, it can be met through renewable energy and energy efficiency.” NBAD expects $48 trillion to be invested in new power over the next two decades—170 gigawatts in North Africa and the Middle East alone by 2020.

Once energy storage scales, solar will be the primary electricity source, says Deutsche Bank in its report, Crossing the Chasm. Within five years, batteries will be technologically ready for large-scale use, it says, as the “incremental cost of storage decreases from roughly $0.14 per kilowatt-hour today to $0.02, without incentives.” Mass adoption of batteries could happen before 2020, and solar will increasingly be cheaper than coal. Deutsche Bank expects solar to generate $5 trillion in revenue over the next 15 years, rising to 30% of global power generation by 2050, from less than 1% now.

“We expect electricity prices worldwide to double over the next 10 to 15 years, making the case for solar grid parity even stronger.” In the next 10 years, utilities will have a substantial opportunity to begin aggregating residential neighborhoods with solar/battery combinations that behave as a single source of load reduction, according to Deutsche Bank. WOW!

Rona Fried, Ph.D., is president of SustainableBusiness.com, a thought leader on green business known for its daily news and Green Dream Jobs service since 1996