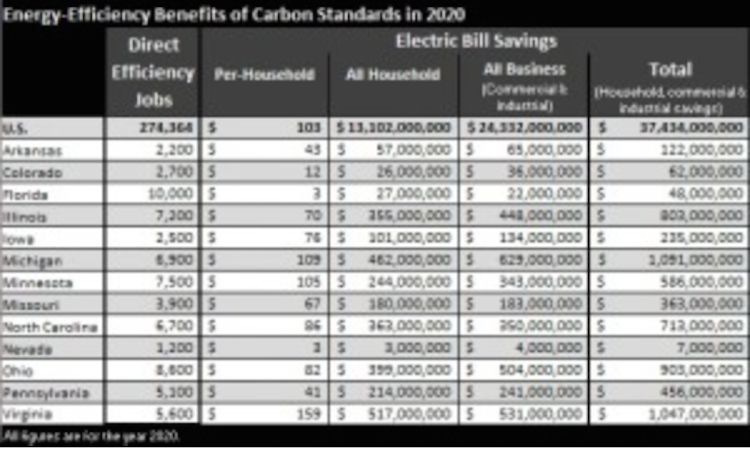 The first-ever limits on carbon pollution from power plants can save American households and business customers $37.4 billion on their electric bills in 2020 while creating more than 274,000 jobs, a Natural Resources Defense Council analysis shows.

Those are among the tangible potential benefits of the anticipated limits on carbon pollution spewing from the nation’s coal- and gas-fired power plants. The standards are the centerpiece of President Obama’s plan to combat climate change and are scheduled to be unveiled on Monday.

The NRDC analysis was conducted by ICF International, using NRDC’s assumptions. ICF is a highly respected firm that has studied electricity markets for industry and government alike. The projected benefits are based on an innovative proposal NRDC advanced in December 2012, and updated this March, that has drawn widespread notice.
If the U.S. Environmental Protection Agency adopts a similar approach, the nation would slash carbon pollution by 531 million tons per year, nearly 25 percent by 2020 from 2012 levels (nearly 950 million tons and 35 percent below 2005 levels), helping deliver more than $50 billion in health and environmental benefits, NRDC’s analysis shows.

“Most Americans support curbing dangerous carbon pollution from power plants because it’s the right thing to do. Cleaning up dirty power plants can be a bonanza for public health and a boon for energy efficiency jobs – and save Americans on their electric bills,” said Daniel Lashof, chief operating officer at NextGen Climate America, and senior fellow at NRDC who oversaw development of the NRDC proposal. “This is a winning step toward a cleaner, cheaper and healthier 21st Century energy future. It’s time to get moving.”
NRDC’s approach, introduced in December 2012, is largely driven by energy efficiency investments and grants states the flexibility to meet the standards in ways that best meet their individual needs, such as accounting for their differing energy mixes.
The new analysis shows that those investments, while creating 274,000 jobs, can save households and business customers $37.4 billion per year on their electricity bills, for example:

In its updated March 2014 analysis, NRDC said that its proposal would reduce carbon pollution 21 to 31 percent by 2020 and 25 to 38 percent by 2025, compared to 2012 levels. The proposal is based on strong standards and adoption of energy efficiency in the states.

“Energy efficiency is the cheapest, fastest and cleanest way to cut carbon emissions, and it benefits local communities enormously by putting people to work and lowering bills,” said Sheryl Carter, co-director of NRDC’s Energy Program. “We are already seeing clear examples of efficiency in action, with huge job and money-savings benefits based on real-world experience by states. This analysis shows that carbon standards that use efficiency as a key strategy will expand these benefits to a much bigger scale. We need to do this now.”

About 1,000 power plants today emit more than two billion tons of carbon dioxide each year, accounting for 40 percent of the total U.S. carbon pollution emissions. While there are limits on emissions of arsenic, mercury, lead, sulfur and soot, there are no federal limits at all on carbon pollution they can release.

Carbon pollution is the key driver of climate change. A host of recent preeminent scientific reports, by the American Association for the Advancement of Science, the Intergovernmental Panel on Climate Change and the National Climate Assessment, have graphically documented the widespread damage that climate change is already causing.

More information on the today’s NRDC analysis.
The Natural Resources Defense Council (NRDC) is an international nonprofit environmental organization with more than 1.4 million members and online activists. Since 1970, our lawyers, scientists, and other environmental specialists have worked to protect the world’s natural resources, public health, and the environment. NRDC has offices in New York City, Washington, D.C., Los Angeles, San Francisco, Chicago, Livingston, Montana, and Beijing. Visit us at www.nrdc.org and follow us on Twitter @NRDC.