By REACH Community Development for PHIUS May 16, 2016 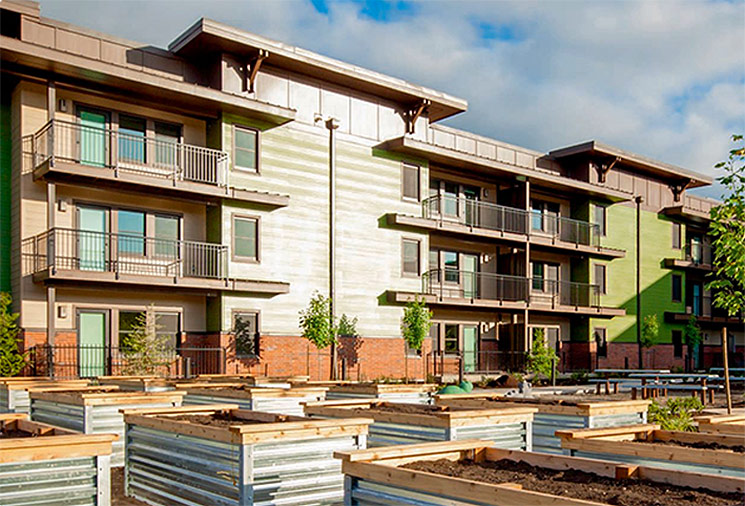 With a goal of providing a more comprehensive model of affordable living, in 2011 REACH CDC secured a 6.2 acre piece of land in Hillsboro, Oregon with the intent to build approximately 150 units over three phases, with Phase I being built to Passive House standards.

Orchards at Orenco Phase I was completed in June 2015 and is the largest certified multifamily Passive House building in North America. The development contains 57 units of housing including 40 one- and 17 two-bedroom apartments. The building is expected to achieve nearly 90% energy reduction for heating and 60-70% for overall energy use compared to a comparable typical building of the same type and size in the Pacific Northwest region. REACH installed an energy monitoring system designed to track and improve upon our tenants’ energy usage habits.

One of the most important first steps the team took was to begin the design process with a goal of meeting Passive House standards, rather than layering Passive House ideas on top of a typical affordable housing development. This meant examining the solar orientation and massing of the building. The project is within a Community Design overlay, which required particular building articulation and high street frontage to address neighborhood design guidelines. These resulted in compromises to ideal massing and orientation from a Passive House design perspective.

The team made up for these necessary compromises by taking a critical look at how to optimize the window-to-wall ratio in order to provide daylighting for residents while reducing energy loss and materials cost. Through collaboration between the architect and contractor, the team examined five different wall assemblies to find one that not only had the necessary R-value and eliminated thermal bridging, but also was the most cost effective, constructible for the local trades and the least susceptible to moisture issues.

One of the largest challenges we faced came in developing air barrier detailing which met the strict air tightness requirements on a large commercial building. The team scrutinized critical details such as the wall to roof connection at the conceptual phase, then worked closely with the structural engineer and general contractor to engineer and detail this connection so as to maintain air barrier continuity within typical subcontractor sequencing. We had to find commercial exterior doors that not only met air tightness requirements, but also had the capacity for electric hardware—security access controls and an ADA [the Americans With Disabilities Act] door operator—as well as sills that met strict federal accessibility standards. Because of the federal housing dollars used in the project, the project also had to meet UFAS (Uniform Federal Accessibility Standards) which are stricter than ADA. The team selected an American made, thermally broken, triple-pane glass storefront door. These doors are not nearly as airtight as European models but will accept standard hardware and access controls and have a UFAS–compliant sill.

Design Solutions – Site
The corner site location and the design overlay requirements for street frontage, parking and articulation limited the design solutions for the site. The architect kept the massing as simple as possible within these constraints and to maximize east-west building orientation.

Building entry and common spaces were oriented to respond to urban design cues such as the light rail and to efficiently stack these functions. Semipublic outdoor spaces—including benches at the main entry and an interpretive plaza near the light rail stop—commemorate the historical significance of the site. Garden spaces, picnic benches and a play area provide outdoor gathering spaces for residents.

Design Solutions – Envelope
The team chose to remove portions of the building from the Passive House envelope—including the laundry and trash rooms—due to Passive House airtightness requirements and high ventilation rates. In addition, the doors to these spaces were custom built for this project, in order to meet Passive House airtightness and provide doors with the appropriate electric hardware for accessibility and fire rating. This example speaks to how the market in North America hasn’t caught up with some of the products that are needed to build a building of this scale. Initially, the elevator was also outside of the Passive House envelope but was brought back in after preliminary blower testing determined that the air leakage at the elevator louver would not put the project over the limit.

The building structure consists of three-story wood-framed construction on top of a concrete slabon-grade foundation. Typical enclosure walls have 2×10 framing with blown-in fiberglass cavity insulation in the stud cavities and 1-1/2” of rigid mineral wool exterior insulation. Mineral wool was chosen specifically due to its permeability and capacity to facilitate drying to the exterior as environmental conditions allow.

Plywood exterior sheathing (with taped seams) serves as the primary air barrier at the enclosure walls. A mechanically-attached spun-bonded polyolefin sheet membrane, installed over the plywood sheathing, serves as the water-resistive barrier. The vapor barrier is located on the interior face of the wall framing. This is a polyamide membrane with variable perm rating to facilitate wall drying to the interior.

The ground floor slab sits atop a 4” layer of EPS insulation, which also wraps around and under the perimeter and interior footings. Type II EPS is used under the slab and at the sides of the footings; however, Type IX EPS is used under the footings for its higher bearing capacity. Capping off the building structure is a prefabricated wood truss roof with 12” of polyisocyanurate insulation and a fully adhered single-ply roof membrane. A self-adhered rubberized asphalt membrane is installed over the plywood roof sheathing, serving as the vapor barrier at the roof assembly (and also functioning as a temporary roof during construction). Decks and sun shades are designed to provide resident outdoor space, architectural interest and summer shading. Vertical shading was considered, but was not allowed by the City design commission.

Each of the mechanical pods is located within the Passive House envelope at the roof level. The ERV in each pod serves 18-20 dwelling units, with direct 4” dia. “home run” duct runs. These home runs are then collected into main trunk lines above the ceiling at the third floor corridor. This solution eliminates the need for fire-smoke dampers at each dwelling unit. The air source heat pump provides approximately 80% of the heating for the building as well as some degree of tempered cooling during the summer. The heat pump is in parallel with the ERV so that it does not create static pressure in the ventilation system.

Two central, ultra-high efficiency boilers provide hot water. The piping is insulated to the dwelling units. The team determined that a temperature maintenance system with heat trace tape was more energy efficient than a recirculation pump.

Fluorescent lighting was designed to meet 0.4 Watts/SF for the dwelling units. Lighting controls were used to reduce loads in corridors and stairs.

REACH is benefitting from the great press of this project and meeting our commitment to creating an affordable living environment for our residents, in a beautifully designed building, and in an amenityrich neighborhood. Our residents are benefitting from the energy savings of living in a Passive House building. Based on residents paying their own electric bills, their savings are expected to be $30 to $45 per month per unit, which, for a low-income resident, is the equivalent of a 1-2% increase in their annual income. In addition, residents have expressed that they feel better living at Orchards at Orenco in hopes that their health outcomes will improve based on indoor air quality and other attributes of the building.

“Every day I find a new reason to love it,” gushes Georgye Hamlin (an Orchards resident), whose one-bedroom apartment is as noiseless as a recording studio.

“It’s cool, it’s quiet, and I don’t even hear the train. During the heat wave, my girlfriend came over to sleep because it was so cool. Yay for German engineering!”

Things we would do again

Things we wouldn’t do again

Insights from the project’s PHIUS+ Rater:
Designate time on the construction schedule for preliminary and final blower door testing. Prepping for Blower Door testing always takes longer than planned and infiltration pathways are inevitably left unchecked until the test is happening. It advisable to schedule no trades for work on testing days to ensure a smooth day that allows for troubleshooting if necessary.

If the shell work will be completed in phases is it possible to test the air barrier in one preliminary test prior to additional layers being added on? If not, can you compartmentalize the building well enough to get meaningful results? Junk data at preliminary testing phase helps no one at final inspection.

Avoid wiring multiple blower door fans together if possible. A duct blaster fan can typically reach 1500 cfm and one blower door fan reach 5000 cfm. Common ventilation ducting between units can be enough of an air pathway to pressurize or depressurize larger buildings if internal walls present a challenge. Pressure test the furthest parts of the building from the central fan by using additional manometers to ensure full pressure is reached. This can save a lot of time in running multiple pressure variations.

“Shiners” from long exterior insulation screws that miss their intended targets (wood structural members) should be left in versus backed out as these tiny penetrations in the air and water barrier can present a problem down the road.

How did you sell PH to the client? What are the benefits to the Building Owner?

The benefits to REACH are being born out in the benefits to the residents of the building. We estimate we’ll achieve nearly 90% reduction for heating and 60-70% for overall energy use compared to a typical building of its type. The building will also have improved indoor air quality provided by the continuous ventilation, better comfort in the units for the tenants, improved construction quality reducing the risk of moisture intrusion, and reduction of noise from the adjacent light rail line.

REACH was also able to secure private sources of funding for the project we would not otherwise have been able to acquire as a result of the innovative nature of the project. The project has gained a significant amount of local and national press and notoriety, and has shed light on the fact that Passive House, which has traditionally been available to the middle and upper income, can be available to lower income families. The work of the team has also had a broader effect on the industry by informing best practices and pushing energy efficiency and comfort standards. Much of the progress, lessons learned, and even failures of Orchards at Orenco, has been shared through blogs, articles, interviews, and presentations at conferences. We hope that this type of information sharing is helpful for other owners, designers, and builders who are interested in bringing Passive House and/or other ultra-low energy concepts to multi-unit residential buildings in the future.

Much of the benefit of the energy savings will go to the residents. The savings is expected to be $30-45 per month per unit, which for a low income resident is the equivalent of a 1-2% increase in their annual income.

On a broader scale, Orchards at Orenco meets REACH’s goal of providing affordable living options. We were able to:

Based in Portland, REACH Community Development’s mission is to create quality, affordable housing and opportunities for individuals, families, and communities to thrive. REACH is a nonprofit affordable housing development and property management company, begun in 1982 in response to neighbors’ concerns about deteriorating housing conditions in Southeast Portland, Oregon. Today, REACH owns and manages a portfolio of 2073 units of service enriched affordable housing located across the Portland metropolitan region, including properties in Multnomah, Washington, and Clark Counties. Our portfolio includes new and renovated plexes, apartment buildings and mixed-use developments. The team involved with Orchards at Orenco at REACH included Dee Walsh, Michelle Haynes, Dan Valliere, Jessica Woodruff and Ben Sturtz.