Flexible Interconnection: A Cheaper and Faster Solution for Connecting PV to the Grid? 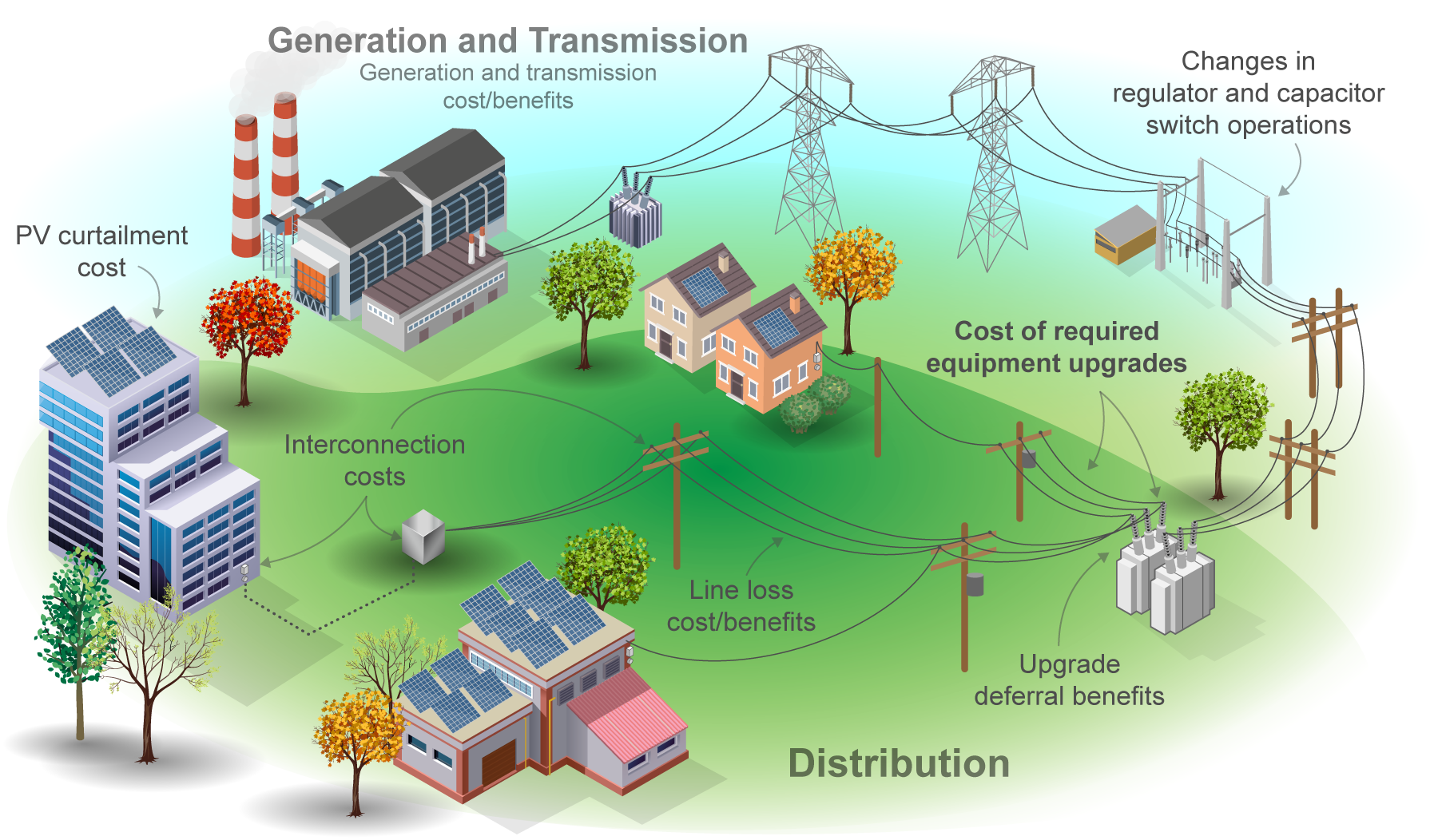 NREL's analysis of hosting capacity upgrade costs is one component of the overall cost-benefit equation for distributed energy resources that also includes the installed cost of the distributed photovoltaic (DPV) system, transmission and bulk system costs and benefits, and a variety of other potential values. Image Courtesy of NREL

Today, interconnection can be slow and often costly for developers of large or aggregated PV projects. Interconnection is the process utilities use to ensure a new PV system can be added to the grid without overloading the local distribution lines or causing other issues. Some areas of the country are experiencing long interconnection queues, particularly if a PV system might backfeed to a transmission line. Resolving interconnection issues can require expensive upgrades to equipment on the electrical distribution system to prevent voltage issues, overloading of equipment, or protection challenges. All of these factors can stress PV projects, even causing some to be canceled. And this barrier to solar will only grow as more PV systems are installed on our electrical grid.

This means the new PV system is at risk of curtailment, but the risk is minimal. Grid constraints arise infrequently—less than 5% per year and often less than 1% per year. In some cases, the potential revenue lost from curtailment is less than the cost of upgrades plus detailed interconnection studies, making this an appealing alternative. Of course, exactly how much curtailment occurs depends on many things—how the controls are structured, how new PV interconnections on the same circuit are dealt with in the future, the evolution of loads on the circuit, and any changes in the circuit itself.

Flexible interconnection approaches have been used extensively in the United Kingdom to avoid expensive line upgrades, particularly for wind systems. Australia has piloted this approach also, and some utilities are exploring the option to make flexible or dynamic contracts the norm in the future.

In the United States, fewer flexible interconnection projects have come online, but there are some. These projects are being used to avoid expensive substation upgrades or to avoid backfeeding PV power into the transmission system and triggering the need for longer, more costly interconnection studies. So far, the additional communications equipment and coordination needed for flexible projects generally means that minimum system sizes of roughly 200kW to 500kW—either a single PV system or an aggregation of smaller systems—are needed for this to make sense.

There is still a lot to learn about how the risk of curtailment in these cases could evolve in the future as additional distributed PV comes online on the same circuits or if loads or grids modernize. Because the cost of upgrades, interconnection policies, and preferences of developers vary, the better solution is ultimately determined on a case-by-case basis.

You can also keep up-to-date with NREL’s publications on this topic on their Advanced Hosting Capacity Analysis website: nrel.gov/solar/advanced-hosting-capacity-analysis.html.

Kelsey A. W. Horowitz is a member of the Distributed Systems and Storage Group in the Strategic Energy Analysis Center. She researches technologies, processes, business approaches, and policies to drive clean energy technology cost reductions and cost-effective integration of renewable energy onto the grid, as well as techno-economic analysis of distributed energy resources, including novel interconnection solutions and control schemes.