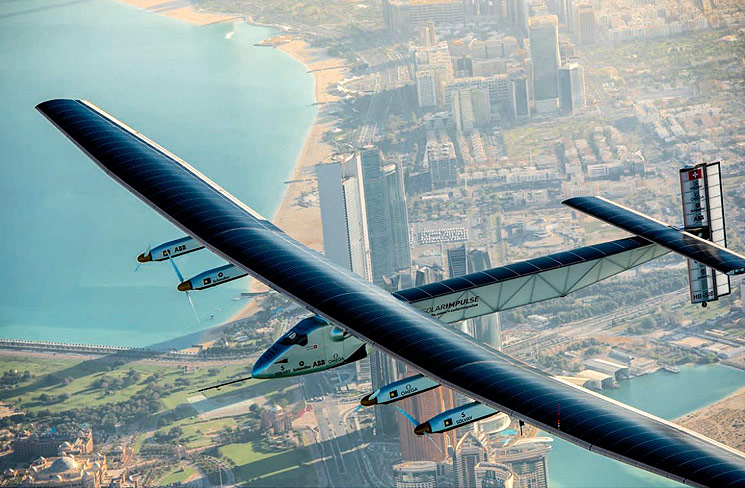 A nice view of the solar panels is visible here as Solar Impulse 2 undertakes preparation flights over Abu Dhabi (UAE).

Taking turns at the controls of Solar Impulse 2 (Si2) – their zero-emission electric and solar airplane, capable of flying day and night without fuel, Bertrand Piccard and André Borschberg succeeded in their crazy dream of achieving the first ever Round-The-World Solar Flight. By landing back in Abu Dhabi after a total of 23 days of flight and 43,041 km travelled in a 17 leg journey, Si2 has proven that clean technologies can achieve the impossible. Beyond this historic milestone, the two Swiss pioneers will continue to urge the global implementation of energy efficient solutions through the creation of the International Committee for Clean Technologies and leverage the expertise and technology gained over the years in Solar Impulse by launching new innovative projects, such as the development of solar powered drones.

Coming from Egypt, Bertrand Piccard landed in Abu Dhabi the morning of July 24, 2016 at 4:05am local time (UTC+4) completing the final leg of an endeavor that was until now considered impossible: flying around the globe in an electric airplane powered only by the sun and capable of flying many days and nights in a row without fuel. This landing brings full circle to the historic circumnavigation that began on March 9, 2015 when Si2 set off from Abu Dhabi with André Borschberg at the controls. Taking turns in the single-seater 3.8m3 cockpit, Bertrand Piccard and André Borschberg have flown Si2 around the world in 17 legs, crossing Asia, the Pacific Ocean, the USA, the Atlantic Ocean, the Mediterranean Sea and the Middle East. A total of 19 world records were set or are still pending by the World Air Sports Federation (FAI), in particular when André Borschberg accomplished the pioneering first of flying five consecutive days and nights over the Pacific Ocean from Japan to Hawaii in the longest duration a solo airplane of any kind has ever flown and when Bertrand Piccard achieved the historic first crossing of the Atlantic Ocean in a solar airplane.

For the two Swiss pioneers, it’s the accomplishment of a dream that was considered impossible by many experts and the demonstration that renewable energies and efficient technologies offer tangible solutions for sustainability. Bertrand Piccard, an explorer and medical doctor at heart, had the vision of an airplane of perpetual endurance after his nonstop round the world balloon flight in 1999, when he made the promise to circumnavigate the Earth again, but this time without any fuel. In 2004, he began bringing together the partners who provided funds and technology for this adventure and partnered with André Borschberg. An entrepreneur and skilled aviator, Borschberg took on the technical challenge of developing the solar airplane and making it fly. More than taking turns at the controls of Si2 in the air, the first ever Round-The-World Solar Flight is also a tandem achievement on the ground: while Piccard developed the project outreach to promote clean technologies, Borschberg pulled together the team that designed and constructed Si2 as well as organized the flight missions. “This is not only a first in the history of aviation; it’s before all a first in the history of energy. I’m sure that within 10 years we’ll see electric airplanes transporting 50 passengers on short to medium haul flights. But it’s not enough. The same clean technologies used on Solar Impulse could be implemented on the ground in our daily life to divide by two the CO2 emissions in a profitable way. Solar Impulse is only the beginning, now take it further! ” said Initiator, Chairman and Pilot Bertrand Piccard addressing the crowd while exiting the cockpit of Si2. 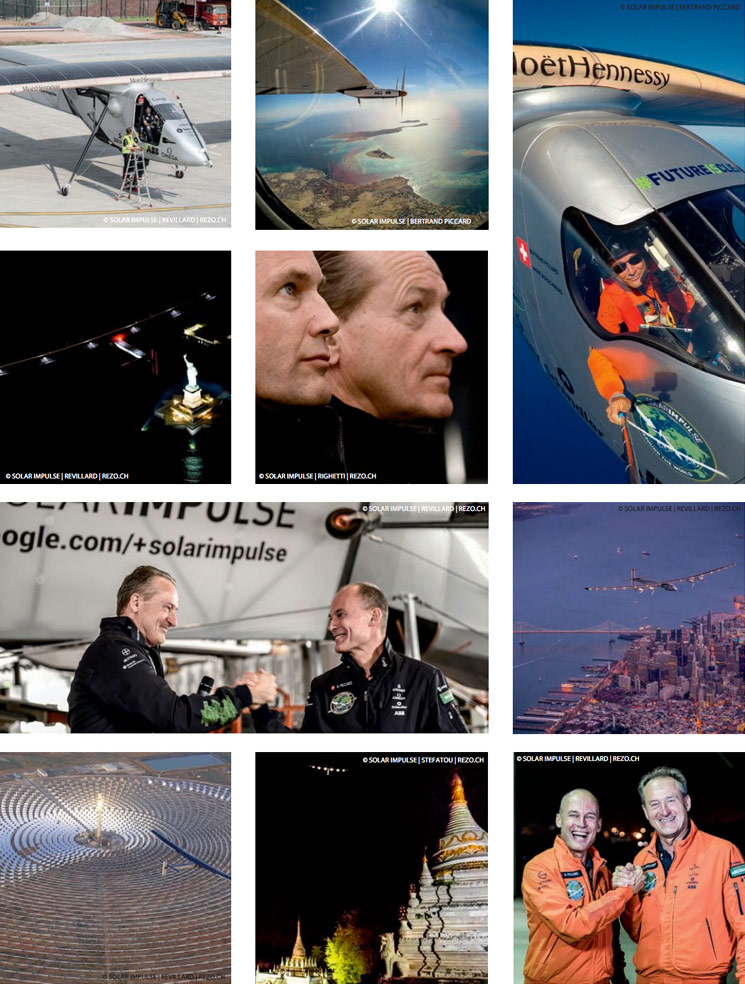 “Flying one leg with a completely new type of airplane is difficult enough, but flying around the world is a real challenge. More than a demonstration, it’s the confirmation that these technologies are truly dependable and reliable,” emphasized CEO, Co-Founder and also Pilot André Borschberg. “There is so much potential for the aeronautical world: while one hundred percent solar powered airplanes might take longer to materialize, electric airplanes will develop in the near future because of their tremendous advantages such as energy efficiency.”

A few hours before touching down in Abu Dhabi, Bertrand Piccard spoke to UN Secretary General Ban Ki-moon live from the Si2 cockpit: “Solar Impulse has flown more than 40,000 kilometers without fuel, but with an inexhaustible supply of energy and inspiration. This is a historic day for Captain Piccard and the Solar Impulse team, but it is also a historic day for humanity,” said the UN Secretary-General. “You may be ending your around the world flight today, but the journey to a more sustainable world is just beginning. The Solar Impulse team is helping to pilot us to that future.”

Looking forward, Bertrand Piccard and André Borschberg will continue to actively promote the use of modern clean technologies as a way to improve the quality of life on Earth. Firstly, through the already announced creation of the International Committee for Clean Technologies that will build on the #futureisclean initiative and regroup the main global actors in the field of clean technologies to bring independent and credible guidance on energy policy to governments and corporations alike. Secondly, by carrying on the work initiated by the engineering team on unmanned and high endurance electric aircrafts, which could fly in high altitude for months, offering services that could provide exponential added value and complement the work being done by satellites today in a flexible and sustainable way.

“We have flown 40,000 kilometers (around the world) without fuel, but there is still a lot to be done to encourage a worldwide implementation of clean technologies and to motivate everyone to reduce their dependence on fossil fuels in their daily lives, hence the creation of the International Committee for Clean Technologies,” emphasized Bertrand Piccard.

“Solar Impulse is of course very well positioned to contribute to the next generations of manned or unmanned electric aircrafts. By capitalizing on the engineering skills and expertise gained over the past decade, we will continue to work to encourage concrete innovations and disruptive solutions,” concluded André Borschberg. 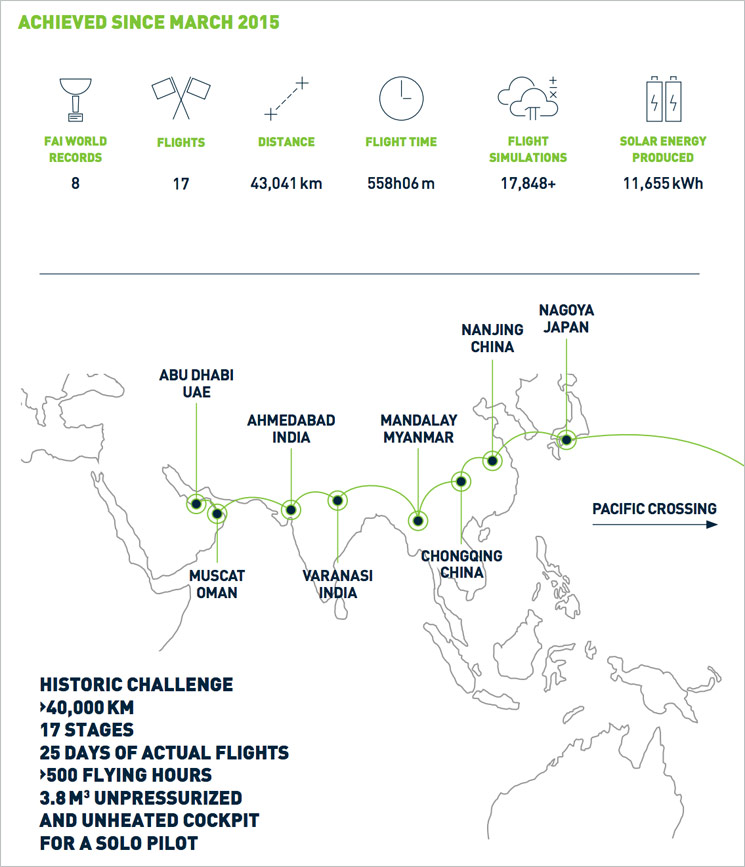 Thanks to the Solar Impulse team, both on the Round-TheWorld and in the Mission Control Center in Monaco as well as the Main, Official and Round-The-World partners, Bertrand Piccard and André Borschberg were able to make their dream a reality and accomplish their pioneering adventure. In addition, Solar Impulse would like to extend its gratitude to: Host Partners Masdar and Mubadala as well as the Government of the United Arab Emirates as the Solar Impulse Round the World Host Country; and to the Swiss Confederation, in particular to the Departments of Foreign Affairs, Environment, Transport, Energy and Communications, the Federal Department of Defense, the Civil Protection and Sport as well as Presence Suisse. Among the hundreds of guests present to witness the historic arrival of Si2 in Abu Dhabi, were HSH Prince Albert II of Monaco, HE Doris Leuthard, Vice President of the Swiss Confederation, and HE Dr. Sultan Ahmed Al Jaber, UAE Minister of State and Chairman of Masdar.

Upon landing, HSH Prince Albert II of Monaco said: “Solar Impulse will mark our history. And we will remember this day, which will remain the day of great victory for solar aviation, also as the day when we were given the proof that we can move towards a low carbon economy, reconciling the mobility and progress we all need, with protection of our planet, which is our greatest duty.” “It is a historic moment for Monaco and for me, because the Principality has the pleasure of housing Solar Impulse’s control Centre and my Foundation is a partner of this adventure. We have shared so many hopes and so many joys together throughout this epic journey,” he added. Vice President of Switzerland Doris Leuthard welcomed this extraordinary accomplishment with a message of optimism for the international community: “Solar Impulse is succeeding where Ikarus failed. An idea born in Switzerland has shown to the world that by investing in innovation and sustainable clean energies, all our dreams can come true. Let’s follow on this great success by good implementation.” 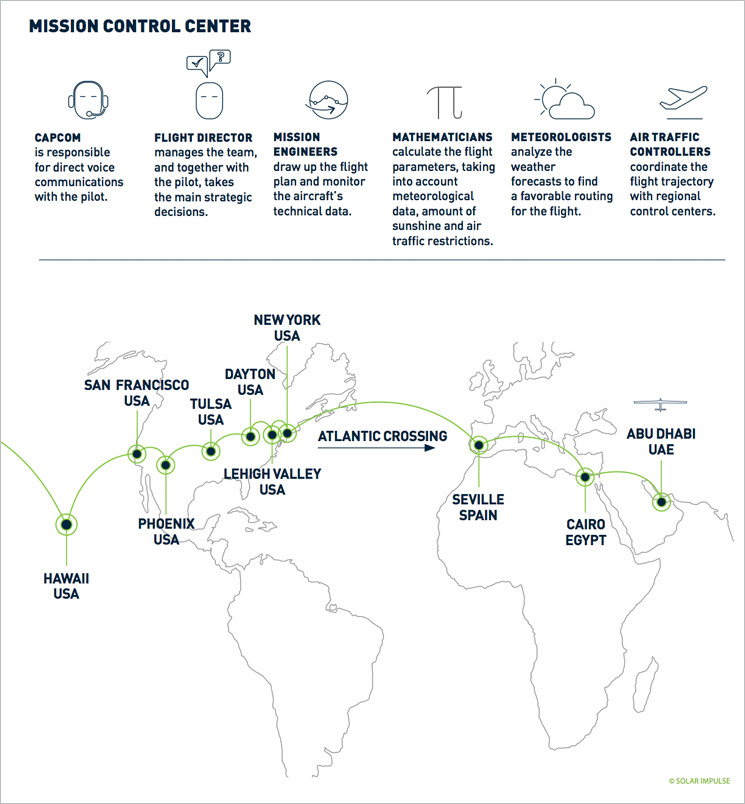 Dr. Sultan Ahmed Al Jaber, UAE Minister of State and Chairman of Masdar, emphasized: “We are pleased to welcome back Bertrand Piccard and Andre Borschberg after their outstanding success in circumnavigating the world using only the power of the sun.”

“As a leader in developing innovative renewable energy projects and technologies, Masdar is committed to supporting ground breaking initiatives, like Solar Impulse, which will inspire and deliver a more sustainable future. Solar Impulse has proven just how practical the application of solar energy can be. It will also provide valuable data that will lead to critical improvements in two key areas, energy storage and efficiency. Masdar is truly excited about the endless possibilities of solar energy and we will be part of taking such technologies to the next level,” HE Dr. Al Jaber concluded. 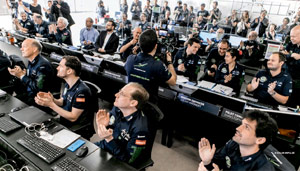 As stated in Bertrand Piccard’s manifesto for clean technologies written in 2004, Solar Impulse’s ambition is “for the worlds of exploration and innovation to make a contribution to the cause of renewable energies; to demonstrate the importance of clean technologies for sustainable development; and to place dreams and emotions back at the heart of scientific adventure.” Upon the final landing of the revolutionary airplane, designed and built by a team of engineers pulled together and led by André Borschberg following more than ten years of calculations, simulations and testing, members of the Solar Impulse team could be seen carrying banners that read: 40’000 km WITHOUT FUEL – A first for energy – TAKE IT FURTHER! There is still much to be done to make the world we live in more energy efficient, but through innovation and pioneering spirit, the first ever Round-The-World Solar flight is credible proof that change is possible and that there is reason to hope for a more sustainable world.