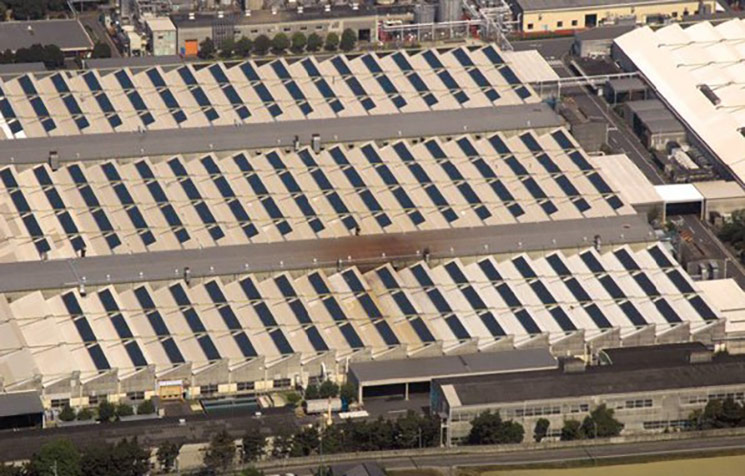 Growth in renewable energy, especially solar, has been proceeding at a frenetic pace since Japan’s very generous feed-in tariff (FiT) took effect on July 1, and everyone from oil companies to banks are rushing to participate.

Japan is expected to jump to the world’s third-biggest solar market this year, placing it right behind China and either the United States or Italy (it’s amazing that a country as large as the United States competes with Italy for second place). Japan’s FiT is so generous that it gives power producers triple the revenue they’d get in Germany.

The government’s goal is for renewables to provide 40 percent of Japan’s electricity by 2030, up from just 8 percent today, supplied largely by hydropower.

On the financing side, the market has lured backers from Goldman Sachs to IBM and Japanese mobile phone carrier Softbank. Now Japanese banks are competing for control of the renewable-financing market.

Mitsubishi UFJ Financial Group Inc., Mizuho Financial Group and Sumitomo Mitsui Financial Group estimate the market will reach $19 billion over the next three years. That’s more than eight times the $2.8 billion invested in Japanese solar installations in 2012, according to Bloomberg.

Softbank’s SB Energy subsidiary plans 500 megawatts (MW) of solar and a 1-gigawatt (GW) wind farm; Japan Mega Solar Co. plans to build 250 solar plants adding up to 500 MW; and Kyocera is building a 70-MW solar plant. IBM Japan has teamed with Goldman Sachs and others to build a 250-MW solar farm, the largest in western Japan.

Spain’s Gestamp Solar is investing nearly $1.2 billion in Japan over the next three years to build 300 MW of rooftop solar (almost as much as its entire portfolio across 13 countries).

Even oil giant Royal Dutch Shell wants a piece of the action. Its Japanese refining division, Showa Shell Sekiyu K.K., announced plans to start solar cell and module production, vowing to raise production efficiency and cost competitiveness to “top levels in the world.” After gaining a foothold in Japan, it has worldwide aspirations. It owns Solar Frontier, the world’s largest CIGS manufacturer.

Part of the urgency comes from uncertainty over whether rates for the feed-in tariff will be cut. When the law passed with such incredibly generous rates, officials intimated they could well be reduced after the market gets off the ground.

Moves toward that have already begun. In January, Trade Minister Toshimitsu Motegi said the FiT may be reduced this April to $0.38 to $0.42 per kilowatt-hour, down from $0.45 per kilowatt-hour for 20 years.

The intention is to avoid boom-and-bust cycles and stabilize Japanese development over the long term.

“I am concerned that the combination of generous feed- in tariffs and available debt will lead to a boom-bust cycle, with annual build in 2013 or 2014 vastly exceeding government expectations,” says Jenny Chase, an industry analyst with Bloomberg New Energy Finance. “This would lead to the removal or capping of incentives, as has happened in Spain, the Czech Republic and Bulgaria.”

There’s also concern about the lack of domestic experience in managing solar projects. “There are quite a few new power producers jumping into the market with little experience and know-how,” says Keisuke Takegahara, head of the state-run Development Bank of Japan’s environment division. “It’s the sponsors who will be saddled with risks.”

When Japan implemented the FiT it took off immediately, showing how powerful the incentive is. According to the Japan Photovoltaic Energy Association, domestic shipments of solar cells and modules soared to 627 MW in the third quarter (July to September 2012), up 80 percent over the same period in 2011.

Consult your financial advisor before making any investment.