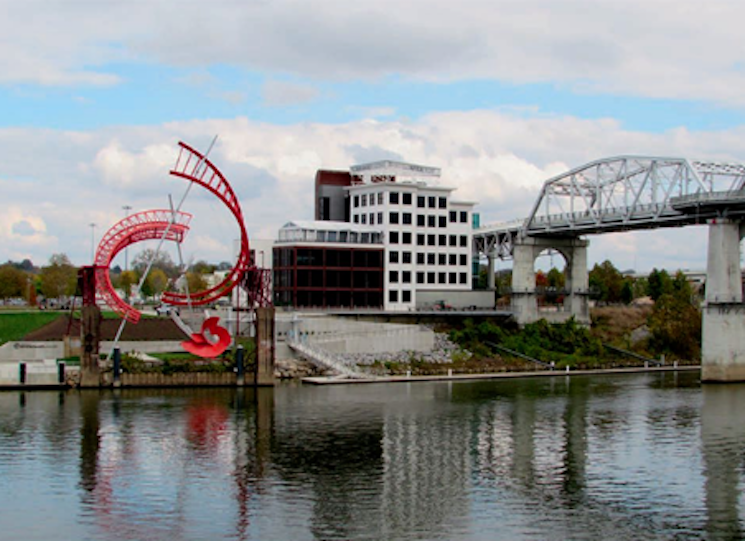 On the banks of the Cumberland River in downtown Nashville, Tennessee, sits one of the world’s greenest buildings. The Bridge Building earned the U.S. Green Building Council’s LEED Platinum certification, the Council’s highest level of recognition, by scoring higher than any other core-and-shell building to date. But what is most remarkable is that this building is over 100 years old.

First built in 1908, the six story Bridge Building on the river’s east bank originally housed offices of the Nashville Bridge Company, which made bridges and later ships, before transitioning to barges in the 1960s for transporting goods up and down the nation’s rivers. Additions to the Bridge Building were constructed in 1923 and 1965, but the building eventually fell into disrepair after 1996, when the Company closed its doors on the east bank and relocated its offices further up the river.

As Nashville’s economy picked up in the mid-1990s, the city was looking for opportunities to redevelop the eastern side of the river, including constructing a new professional football stadium. All the abandoned buildings and warehouses on the east side were torn down to make room for the stadium and parking lots, except for one building—the Bridge Building— which was spared.

Back then, there was nothing architecturally unusual about the Bridge Building, but it was well built and held a strategically important location next to the Sparkman Street Bridge, which was soon to become the popular John Seigenthaler Pedestrian Bridge (no cars allowed). Additionally, the city considered the building historically significant because it represented the vital role of the river and bridge in the city’s early industrialization. Longtime residents recall when it was a favorite pastime to gather on the opposite riverbank to watch new barges being launched from a site adjoining the Bridge Building, a practice that continued well into the 1980s.

Guided by the Nashville Riverfront Redevelopment master plan, the city decided to renovate the Bridge Building to provide more public and commercial space and as a demonstration project for what could be accomplished with other old buildings in town. Architects were interviewed, and the winning firm, Hastings Architecture Associates, LLC. was selected, in part because of their vision for the building: to achieve LEED Platinum certification through good design and innovative energy features while preserving the original form and features of the old building.

The renovation retained the inner core structure of the building, the two later additions, and all original window openings. (Because of the building’s generous window sizing and narrow floor plates, daylighting is effective for most areas, dramatically reducing the need for artificial lighting.) A 6,215 square foot addition was made to the east side of the building to provide modern amenities, such as an elevator, mechanical equipment areas, stairwells, toilet rooms, and several lobbies. The addition is distinguished architecturally from the existing building by its contemporary façade of weathered steel and glass. A perforated metal screen was positioned on the exterior east wall that functions as a sunscreen and joins with solid weathered steel panels to resemble the rusty looking hull of an old barge, recalling the original building’s industrial use.

A steel deck overlook was also added during the renovation, as were native plants and a rainwater harvesting system, and an elevated walkway connects the building to the bridge, as in the old days. The site work incorporates Ghost Ballet for the East Bank Machineworks, a monumental sculpture by Alice Aycock that was completed in 2007 and rests on the base of a gantry overhead crane used by the Nashville Bridge Company. The Bridge Building’s sustainable features include a highly walkable location for community services and restaurants, access to natural daylight and views to the outdoors (reducing the need for artificial lighting), passive solar water heating, high performance windows and architectural elements that protect against unwanted heat gain, a high-efficiency geo-exchange heat pump system, and a rainwater harvesting system that recycles rainwater for toilet flushing.

According to Mike Leonard of greenSTUDIO, the project’s sustainability consultant, “While it was challenging working with what were essentially three buildings connected over time, our team took great pride in preserving this historic structure—saving material from the landfill—along with its part in Nashville’s history, and providing new life with modern, efficient, and environmentally preferable building systems.” (Leonard is a LEED Fellow, the most prestigious designation awarded by the Green Building Certification, Inc.)

Today, the Bridge Building is at the heart of the city’s riverfront revitalization plan which includes the adjacent Cumberland Park, Nissan stadium, and East Bank Landing, a launching area for kayaking and canoeing on the river. The building houses the Park office, public restrooms, and a concession all stand on the first floor, and the remainder of the building is home to several businesses and nonprofits, such as an events and catering company and the Cumberland River Compact. Because of the Bridge Building’s stylish presence in an attractive riverfront setting, the building is a favorite filming location for the hit TV series on ABC, Nashville.

A goal of the Bridge Building is to celebrate life on the Cumberland River and the history of Nashville, a river town that grew up on the River’s banks. The Cumberland River Compact, one of the Bridge Building’s principal tenants, has been instrumental in improving water quality in the Cumberland River Basin, and in doing so, improving the quality of life in Basin communities. Beginning in 1997, the Compact has been collaborating with government officials, neighborhood groups, farmers, businesses, and other stakeholders to ensure a clean and abundant water source for the Basin, which contains some of the most diverse freshwater plants and animals on Earth. Current Compact activities include removing dams on tributaries, installing rain gardens, visiting schools, and sponsoring a variety of community events, such as weekly River Talks and the city’s popular dragon boat races. Learn more about the Cumberland River Compact at http://cumberlandrivercompact.org.

LEED, an acronym for Leadership in Energy and Environmental Design, is a green building certification program offered by the U.S. Green Building Council. The LEED for Core and Shell rating system is a market-specific application that recognizes the unique nature of core and shell development. It is intended for projects where the developer controls the design and construction of the entire mechanical, electrical, plumbing, and fire protection system—called the core and shell—but not the design and construction of the tenant fit-out. To be eligible to pursue core and shell certification, the owner must occupy no more than 50 percent of the building’s leasable square footage. You can learn more about LEED at www.usgbc.org/leed.

Sustainability Features of the Bridge Building