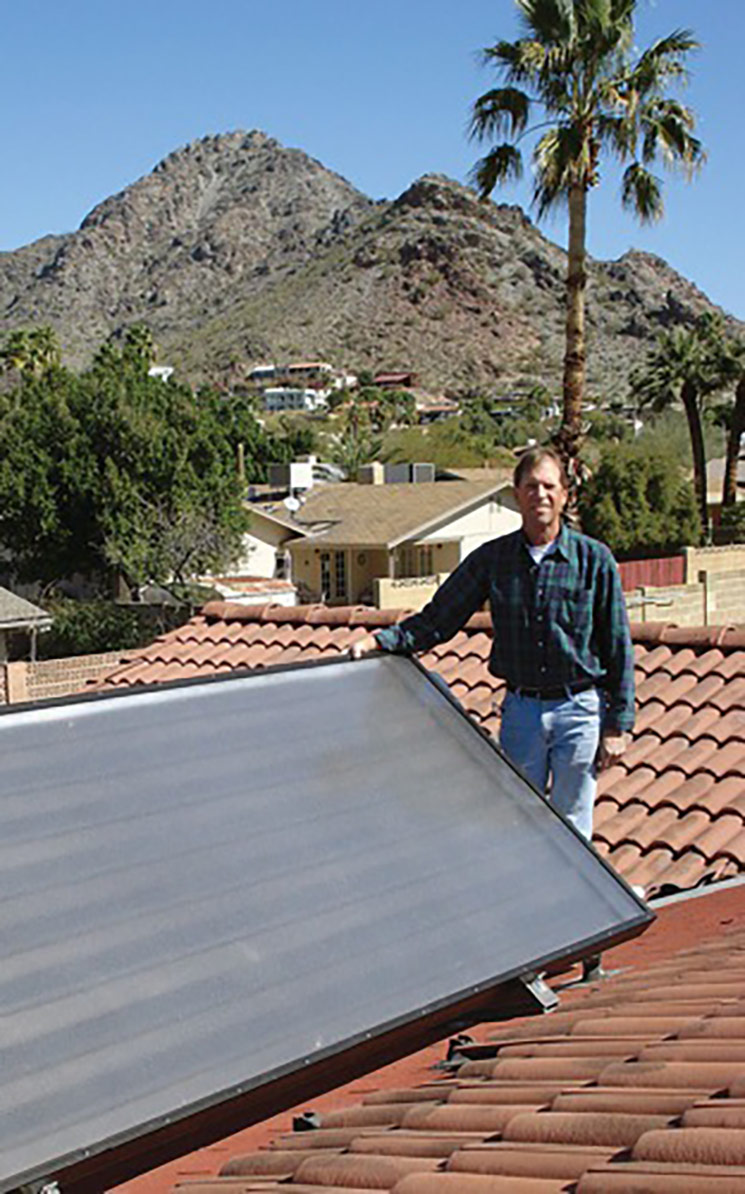 The authors’ study focused on the utility impacts of solar water heating, but it looked at system performance and price, too. The range was striking. In the Phoenix area, one popular system cost thousands of dollars more than the median-priced one, and could take the full life of the system to pay back. On the other end of the spectrum was this locally manufactured solar water heater from Pacific West Solar. Based on 2011 costs and incentives, it would “pay back” in about a year.

Across the nation, robust residential photovoltaic (PV) markets bring mostly happy surprises: lower PV prices, new financing options, profits for top competitors and greater visibility for pro-solar policies. But in some regions where solar water heating (SWH) had been building a strong niche market, booming PV has triggered a shift. Utilities that have both SWH and PV programs have noticed a SWH slowdown, in the midst of a storm of applications for PV incentives and interconnections.

For example, for Salt River Project (SRP), a utility serving the Phoenix metro area, SWH was a major success story. From 2004 to 2012, the utility developed one of the largest SWH programs in the country, helping more than 6,700 customers to install systems. SRP was a leader in SWH quality assurance and was one of the first utilities to base customer incentives on the kilowatt-hour-equivalent of system performance. In 2009 — a banner year — the number of systems in the program grew by 180 percent. But last year, for the first time, applications for SWH incentives fell. Instead, SRP’s PV program grew by 170 percent, with the addition of 10 megawatts of residential PV. According to Joel Dickinson, SRP’s solar engineer, the utility realized it was time to ask, what is the utility value of solar water heating, and what is its role in an age of booming PV?

The SRP study that followed in 2012, by Millennium Energy of Golden, Colo., analyzed a range of benefits for SWH, alone and in combination with PV. As the study’s authors, we had looked at SWH from the utility perspective before. We also had looked at PV from the utility point of view. An analysis of both SWH and PV was a natural next step. Our results suggested a synergy between PV and SWH that “either-or” utility decision makers might miss.

For our presentation at the upcoming SOLAR 2013 conference in Baltimore, Md., we broadened the study, to see if other utilities also might benefit from the synergies between these resources. That paper draws on the SRP research, as well as on SWH impact studies of United Power, a Denver-area electric cooperative (1); Valley Electric Association, an electric co-op in the high desert near Las Vegas (2); and Arizona Public Service (APS), which serves electric customers statewide. One of these studies used SWH field monitoring; the others used TRNSYS software, drawing on data from the Solar Rating and Certification Corp. and U.S. Department of Energy Build America program to model the year-round performance of the installed fleet of SWH systems. This performance model was then applied to utility load and economic analyses.

Besides confirming that both SWH and PV may be cost-effective for customers and acknowledging familiar market challenges, we concluded that a lot of utilities have problems that SWH helps solve. They might be wise to promote SWH as “the other way” to go solar today.

Of course, different utilities would have different reasons to get into SWH in the first place. Typical utility drivers include —

The focus of impact-modeling research is to figure out which drivers count for a given utility — and how much. For example, utilities typically like coincident-demand savings, because their wholesale energy costs rise on peak. An often-cited rule of thumb estimates utility coincident-demand reduction from SWH at 0.5 kilowatts (kW) per system. For utilities in these studies, however, coincident-demand savings varied from a low of 0.14 kW per system on one utility’s summer peak to a high of 0.7 kW per system for another utility’s summer peak. The rule of thumb proved not so good. Further, some utilities might not be able to “cash in,” despite strong demand savings. To benefit, the utility cost structure must include wholesale demand charges or increasing marginal energy costs during peak periods. Some utilities that have plenty of generation today aren’t pricing what they see as future costs. One lesson of this research was that it pays to ask the right questions — and to be ready for surprising answers.

Figure 1 shows a winter peak day load curve for SRP, with the curve for hourly SWH program energy savings superimposed. The utility load and SWH demand-savings curves both follow a familiar pattern. People get up in the morning and turn things on, including hot water for showers. SWH customers use stored solar heat and save. The utility benefits from winter peak reduction — at SRP, on the order of 0.46 kW per system. In the evening, people come home and run hot water. Again, SWH contributes savings. In particular, only a few utility strategies can address a winter morn- ing peak, and SWH is one of them.

Unfortunately for SRP and many utilities in hotter climates, this benefit fades in summer. The summer morning peak is lost in the steady, day- long build in air-conditioning loads. Particularly, the energy-savings potential of SWH is not as great as one might expect on a Phoenix summer day. Why? The city water is already warm as it comes off the street. SWH accounts for modest summer energy savings, but the most noticeable thing is probably the timing — SWH savings last into the night, until 11 p.m.

In comparing SRP findings to those from other utilities, more details on potential value emerged. These included economic findings that lacked detail, because SRP has not pinned a dollar value to energy demand savings, even though it favors load factor improvement. By contrast, at the time of the United Power study, that Denver-area utility was paying more than $20 per kilowatt as a wholesale demand charge — boosting utility savings to $2,000 over the life of each SWH system.

SRP has not officially weighed in on conclusions about the strategic value of SWH or PV, but it has a sustainable portfolio commitment — the public power version of the state’s renewable portfolio standard — and SWH and PV both count. The next question SRP’s Dickinson raised was, might SWH and PV be interchangeable? It turns out, they are hardly interchangeable at all — but they are complementary.

Many utilities have problems that SWH helps solve. They might be wise to promote SWH as “the other way” to go solar today.

Figure 2. Solar water heating is complementary to PV on a winter peak day, and may provide added value to the utility.

Figure 2 above is a winter peak-day load curve for SRP — just like figure 1, but with the addition of a curve for the hourly contribution of PV program savings. PV is a daytime resource — that’s plain to see. But if SWH were deployed at scale (say, in Phoenix, five or six SWH systems for each average-sized 5-kW PV system), it would pick up before and after the PV contribution. SWH would address the winter morning peak and the evening peak, too. Together, the PV and a scaled-up SWH fleet would represent a fairly robust daylong solar resource.

The PV/SWH pairing could serve utilities in summer, too. Figure 3 (page 23) shows United Power’s summer peak load, along with a curve for hourly SWH demand savings and a curve for hourly PV generation. We chose United Power data for this illustration; the SRP summer curves were similar, but less dramatic. United Power peaks especially late in summer. PV offsets high cost energy throughout the day, but by 5 p.m., it is SWH that is helping more to offset peak demand.

Making the Case for PV and SWH

The strongest argument against using SWH for strategic load management is that it would take a lot of SWH systems to make a difference. We estimated a ratio of five to six SWH systems per typical household PV system to get the most out of these complementary resources. Benefits would kick in long before this goal was met, but it is a reachable goal. In Hawaii, America’s best solar market, SWH is used in 80 percent of new homes and serves more than one-third of all homes. Solar thermal markets around the world — including in cold-climate countries like Austria — underscore the possibilities. Then again, recent market studies from the National Renew- able Energy Lab have warned that heat-pump water heaters and other energy-efficient appliances are becoming strong competitors to SWH, especially in Sun Belt states. Few would deny it is hard to sell SWH to households that have natural gas, unless the customer really wants to “go green” or has access to a big rebate. Perhaps high-penetration SWH is attainable, but not in all markets.

Many utilities have problems that SWH helps solve. They might be wise to promote SWH as “the other way” to go solar today.

SWH supporters point to the sizable rural and regional markets where natural gas is not  the dominant fuel for water heating. They also might argue that comparing SWH to products that are merely energy efficient shortchanges SWH. Defined as a solar resource, SWH “generates” RECs, which some utilities, like SRP, APS and Valley Electric Association in Nevada could use for compliance. Right now, REC markets everywhere are soft and getting softer. But utilities still need solar customers in order to collect solar RECs, and SWH offers some advantages.

In booming PV markets, a SWH option could relieve utility stress about the challenges of integrating so much PV, so fast. Utilities could expand their solar programs by welcoming PV and welcoming even more SWH. Customers who “go solar” with SWH are putting no power on the grid at all. There is no argument over interconnection and no argument over net metering. Most SWH programs require no meters, though the industry anticipates low-cost Btu meters that could count RECs and improve performance. In any case, the utility’s infrastructure costs for SWH are inconsequential. And administrative costs are similar to those for any well-run demand-side program. SRP program costs per system, excluding incentives but including inspections, practically vanished in the overall life-cycle benefit/cost analysis.

The strongest argument against using SWH for strategic load management is that it would take a lot of SWH systems to make a difference — a ratio of five to six SWH systems per typical household PV system.

This research does not take away from PV. We expect PV will become a major generating resource for many utilities. But some utilities are climbing the learning curve for PV, wishing they had more time to resolve concerns like the so-called “passing cloud effect,” or an imperfect match between seasonal loads and PV production. The solar industry will eventually achieve integration and storage solutions. But right now, what if a good portion of residential utility customers went over to SWH, a technology that has built-in storage, which comes in handy for the utility on early winter mornings and hot summer nights?

Intrigued by these findings, Dickinson notes that it’s still a leap for policymakers to embrace SWH as a strategic resource. To most policy-makers, SWH has just been a customer service, a “green” water heater and, in some states, another way to get RECs. But the opportunity for utilities to develop PV–SWH synergy could be timely. The potential benefits are greatest in the next few years — just when the market may be tempted to run the other way.

Joe Bourg (jbourg@q.com) is the president of Millennium Energy LLC in Golden, Colo. A pioneer in determining the economic value of solar for utilities, he has led PV and SWH program design and evaluations, large-scale project feasibility studies and policy research, including expert witness testimony.