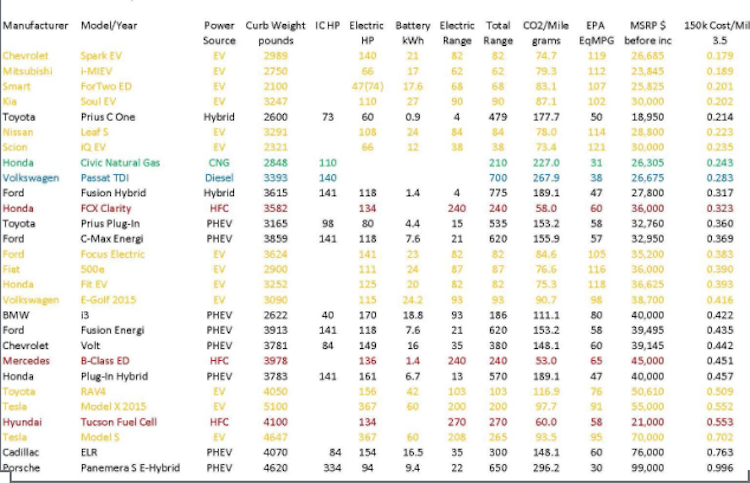 If 2012 was the breakout year for electric- drive (ED) cars in the United States, 2013 represented steady, mainstream growth. While total light-vehicle sales grew about 7.6 percent, to a pre-recession level of about 15 million cars and small trucks, sales of hybrids, plug-in hybrids (PHEV) and pure battery electric vehicles (EV) jumped 21 percent to 592,232, according to the Electric Drive Transportation Association. Sixteen percent of new EDs were plug-ins, either PHEVs or pure EVs. All together, these high-efficiency cars comprised 3.8 percent of the overall market for light vehicles (cars, pick-ups and SUVs). That’s up from an average of about 300,000 EDs annually (about 2.5 percent of all vehicles) during the recession years, 2007 to 2011.

This 3.8 percent of the market may not sound like much, but if ElectricDrive were a car company, it would rank eighth in U.S. sales — behind Hyundai but ahead of Mazda, Mitsubishi, Kia and Subaru.

The chart presented in this article is compiled mainly from data published in the Environmental Protection Agency (EPA) report “Light-Duty Automotive Technology, Carbon Dioxide Emissions, and Fuel Economy Trend: 1975 Through 2013,” published in March 2014. We’ve added data for some 2014 and 2015 model-year cars.

We’ve calculated a comparative cost-to-own figure for each of these 28 cars, presented as a cost per mile for the first 150,000 miles. The calculation is based on manufacturers’ suggested retail price and estimated cost for the appropriate fuel. The price here is for the base model, with the leanest package of options, and without sales tax, dealer fees or insurance. Nor does the price include federal or state rebates, tax credits or other incentives for electric-drive vehicles. The federal credit is currently $7,500, which means you can buy the cheapest EV (the Smart) for the equivalent of $18,325. Subtract state incentives ($6,000 in Colorado) and the cost of entry drops to $12,325. Now it’s beginning to look like a logical addition to a home solar array. (One exception to the 150,000-mile rule: We based the Hyundai hydrogen-car cost on its three-year lease cost, and 45,000 miles.)

How To Read the Chart

The chart is arranged in order of cost to own—cheapest first.

Power Source indicates whether the car runs purely on batteries (EV), is a hybrid (liquid-fuel engine combined with an electric motor) or plug-in hybrid (a hybrid with a larger battery pack that can be home-charged for extended range on batteries alone). CNG means com- pressed natural gas, which runs cleaner than gasoline when burned in a conventional piston engine, and currently costs less, too — about $2.20 per gallon. We’ve included one diesel car, the Volkswagen Passat TDI, for comparison, and priced its fuel at $4 per gallon. Note that a couple of dozen light diesel cars from other manufacturers compete with VW.

Hydrogen Fuel: This year we included the Honda FCX Clarity, Mercedes F-Cell and Hyundai Tucson Fuel Cell, and priced hydrogen (where you can get it) at $5 per kilogram. Miraculously, a kilogram of hydrogen turns out to have almost the same heat content as a gallon of have almost the same heat content as a gallon of gasoline, but because the fuel cell is much more efficient than an internal combustion engine, mileage is in the 60-miles-per-kilogram (mpk) range. At press time, the Los Angeles area had about 18 public hydrogen filling stations, with more promised there, in the Bay Area and Sacramento. Also promised soon: a hydrogen version of the Toyota Highlander. Ford and Nissan have an agreement to share the Mercedes technology. Note that the manufacturers are now leasing these cars as an expensive test program. There’s no guarantee that the cost of hydrogen won’t rise, and as noted ahead, the tailpipe emissions are hardly the whole story for the economic and environmental costs of hydrogen fuel.

Curb Weight reflects the car’s general heft, in pounds. It’s what a car weighs with a full tank of fuel but no passengers or luggage. Of course, a pure EV has no gas tank — instead, it has heavy batteries. In the past, we assumed that lower curb weight translated almost automatically into better fuel efficiency, but the weight of a battery pack can reverse that idea.

IC HP means horsepower of the internal combustion or fuel-powered engine, present in any hybrid or PHEV.

Battery kWh is the storage capacity of the battery pack, in kilowatt-hours (kWh). The larger this capacity, the longer the car’s electric range.

Electric Range is given in miles. This is the distance the car is said to travel on electric power alone, before any fuel-driven engine kicks in to drive the wheels or charge the batteries. In some cases we’ve calculated the electric range based on battery capacity.

Total Range, in miles, is the total distance the car is said to travel before fully depleting the batteries and/or emptying the fuel tank.

EPA CO₂ emissions is given in grams per mile. Note that for a pure EV or PHEV, this ultimately depends on how the recharging electricity is generated. Coal-fired plants generate high grams per mile, hydroelectric plants generate low grams per mile. No car gets a zero-carbon rating because the EPA counts in the carbon footprint of manufacturing and shipping the vehicle. While it’s not reflected in this chart, an efficient fuel-driven hybrid may be cleaner than an EV powered by coal. Also note that for hydrogen-fuel cars, total emissions depend on how the hydrogen is produced. Nearly all commercially available hydrogen is extracted from natural gas and so is not carbon neutral. We’ve assumed that a kilogram of hydrogen is the carbon-emissions equivalent of 51 kilowatt-hours of electricity — the power required to electrolyze water.

EPA Equivalent MPG calculates the car’s comparative fuel efficiency, considering that a gallon of gasoline contains the energy equivalent of 33.7 kWh and assuming that a PHEV depletes its battery before switching to liquid fuel.

MSRP is the manufacturer’s suggested retail price in dollars, for the base model, excluding taxes, tax credits, incentives, rebates, insurance and registration fees. In the case of the hydrogen fuel cars, the MSRP is estimated based on monthly lease payments. Actual cost of manufacture may be many times higher than this. In the case of the Honda Clarity and Hyundai Tucson Fuel Cell, the monthly lease payment is said to include fuel and maintenance, so actual cost of ownership may be lower than our calculated value.

150k Cost per Mile is the cost to operate, given in cents per mile over the first 150,000 miles. This calculation assumes that gasoline sells for $3.50 per gallon, electricity for $0.11 per kilowatt-hour, compressed natural gas for $2.20, diesel for $5 per gallon and hydrogen for $5 per kilogram.