Solar Saves for Renters and Landlords 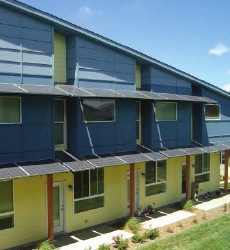 One of the barriers to residential solar power is the split-incentive issue at rental properties: A landlord rarely has an incentive to reduce utility bills for the renter. As long as renters pay for electricity and heat, owners won’t improve the efficiency of the property.

What if the lease were structured to include a portion of the utility bill? An odd provision of affordable-housing legislation puts a ceiling on the allowable costs to the renter, calculated as the combined rent and projected utility bill. It means that if a developer can slash the utility bill, rent can rise enough to cover amortization of the solar installation.

Peak Properties, in Boulder, Colo., has put up 60 handsome townhomes on this principle. Located in Lafayette, 15 miles east of Boulder, the Eagle Place rental units look upscale, with photovoltaic (PV) awnings that function as light shelves, and the south-facing roof surfaces gleam with water-heating collectors. A typical 1,200-square-foot (111-square-meter), three-bedroom unit feels spacious, bright and airy, with 9-foot ceilings on two floors. The kitchen door opens onto a green common area, the front door onto a porch or patio. The units are solid, constructed and insulated 25 percent above the Built Green standard and about 30 percent above the International Energy Conservation Code.

The location is great for families. The local high school and elementary school lie a few hundred yards to the east, and a large grocery store is just a few hundred yards to the west. Bus routes and bike paths adjoin the property. Lafayette is now a fast-growing bedroom community sending commuters to high-tech businesses between Denver and Boulder, but it started in 1888 as a coal-mining town and so has a picturesque downtown district. The last mine closed in 1956.

Eagle Place townhomes are so-called Section 42 apartments, occupied by families earning 40 to 50 percent of median income for Boulder County. That’s roughly $40,000 per annum for a family of three. Two bedroom units start at $727 a month, rising to $1,300 for the largest three-bedroom end-unit, with a view to the west of the Rocky Mountains.

Developer Amory Host has constructed about 710 apartments since 1988.

Developer Amory Host, president of Peak Properties says his company makes money on the rentals in spite of the low rents, precisely because of the solar and energy-efficiency features. The “maximum gross rent” paid by the tenant includes a utility-bill allowance. By halving the projected utility bill to $58 per month (for a three-bedroom) and $49 per month (for a two-bedroom), Peak Properties gets to keep a larger piece of the monthly rent allowance.

Even so, what made the development financially viable was Colorado’s renewable portfolio standard, passed by voters as Amendment 37 in November 2004. It called for 4 percent of a utility’s renew- able power purchase to come from solar technologies. In negotiations with the public utilities commission, Xcel Energy came up with a rebate of $4.50 per installed watt during the first year. That covered roughly half the cost of installing grid-tied PV systems, depending on economies of scale. Additional savings were expected through federal tax credits.

Consultant Dave Kreutzman of Sun Electric designed a 67-kilowatt (kW) system using 322 Sharp 208 PV modules with Fronius inverters. Architect George Watt worked the panels into an awning design. In addition, the six-unit building got 96 solar thermal water-heating panels, each 4 feet by 10 feet (1.2 meter by 3 meters), feeding 32 120-gallon (454-liter) storage tanks for domestic hot water and for the Aquatherm space heating. The storage tanks are located in second-floor utility rooms, where insulated pipes make a very short run from the roof-top collectors. No rebates were available for the water-heating system, but calculations showed it would play an important role in reducing the monthly utility bill, especially as natural gas prices spiked.

The company broke ground in September 2006, and the first tenants moved in a year later. The 60 units were fully rented by the close of 2007.

A year later, Host reported that the energy systems worked as designed and delivered the expected performance. “The tenants don’t notice a difference but the utility bills are about half of what you get with the average housing stock,” he said. In October, Eagle Place received a Project of the Year award from MultiFamily Executive magazine, a trade publication for the housing industry.

Host points out that under existing codes and incentive plans, solar-enabled affordable housing makes sense only with new construction. “The rental market is on the rise here, but a lot of it is old stock and can’t be upgraded economically,” he said.

In 1980, Host dropped out of the University of Colorado, and earned an associate degree in passive solar design and drafting at Denver’s Red Rocks Community College. Then he returned to CU to graduate cum laude in economics in 1984, with an honors thesis on the economics of solar energy. He founded Peak Properties in 1988, and the company has put up half a dozen projects totaling about 710 rental units. The list includes several Section 42 affordable housing developments, a senior housing project and some conventional-market apartment complexes. Host is now going through the permitting process for the 26-unit Trinity Commons development near downtown Boulder, on property owned by Trinity Lutheran Church. Half the units would be affordable rentals.

While the economy tanks, the market for affordable housing projects is unaffected. These projects are funded by the federal government through state housing authorities, on a per-capita basis. In Colorado, Host applies for financing to the Colorado Housing and Finance Authority (CHFA, pronounced chiffa). “As the competition for market-rate housing tightens up, we get new companies entering the affordable-housing market,” Host explained. “CHFA now gets 10 project proposals for the same $5 million of available funding. The same number of projects will get built, but they’re the good ones: The market gets better-quality projects.”

In October 2007, Host launched a parallel company, Peak Solar, specializing in solar and energy-efficient conversions for apartment complexes. The firm has completed the engineering for a 282-kW PV system feeding 560 apartments at the 40-year-old Cherry Creek Club complex in central Denver. And the City of Lafayette has approved a power purchase agreement covering installations on the public library, police and courts building, and water reclamation center — three arrays totaling 350 kW.