Values Clarification: So Why Exactly Do You Need a Wind Turbine? 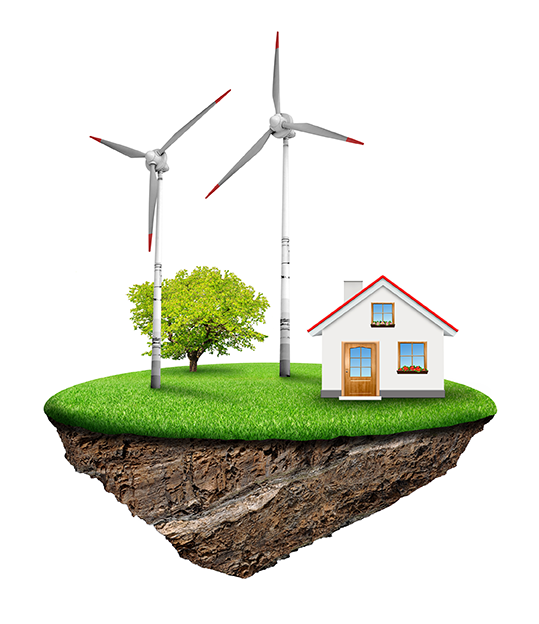 For example, if the property you wish to power is off-grid, you may feel a need for a wind turbine. Wind in combination with photovoltaics will likely make the most sense. In most areas of the country, when the wind’s not blowing, the sun is shining, and vice versa, both daily and seasonally. A wind/PV hybrid system allows you to downsize both generating sources and the requisite battery bank while maximizing generating time. And if properly sized with attention to load management, a wind/PV hybrid system may not even require a back-up fossil fuel generator, or if the backup is necessary, minimize its use.

Most of us, however, are tethered to our local utility, like it or not. So for most us, we have a perfectly good source of electricity available 24/7/365, except for the infrequent power outage. And unless a utilitytied renewable energy (RE) system has a back-up battery bank, it will not function during a power outage. Indeed, the National Electric Code requires that RE systems disconnect from the grid immediately in such situations. In a grid-connected situation, one might still want a wind turbine.

So if we’ve got electricity from our local utility, why duplicate the effort, and at our own expense to boot? Good question! In an increasing number of locations, what is known as “behind the fence” generation of electricity with wind or PV is cost-competitive with utility-supplied power. In such cases, the rationale might be strictly economic. And while it is true that you have to pay for the RE system up front plus the required operation and maintenance over the 20 to 30 year life of the system, you are essentially locking in the cost of your electricity over that time period, as you really have no idea other than projections what will happen to the price of the local utility’s product. With the advent of smart meters, utilities are salivating over not only time of day billing, but charging residential customers for their peak energy and demand in 15-minute increments just as they do for larger industrial and manufacturing facilities. When, not if, that happens, the sky is the limit relative to your future electric bills. So a wind or PV system might make sense on a purely economic basis.

Most of us “invest” based on what we value, what’s important to us. And this is where arguments against RE systems based on cost-effectiveness and payback break down. So when considering a wind or PV system, consider its value to you, not (just) its cost. Cost will come into the equation later when you need to figure out how to pay for or finance the installation.

Although many politicians either aren’t paying attention or are in denial, most Americans, meanwhile, are concerned about climate change and the link to the burning of fossil fuels. And most Americans understand that renewable technologies will help mitigate the effects of climate change and are not only eager for the transition, but are willing to participate in that transition. They understand the value of RE. They also understand the link to the environment and the outdoors, both highly valued by most voters. RE allies include just about every outdoor hunting, fishing, hiking, skiing, kayak and canoe, birding and gardening interest you can think of.

Rather than the end of the fiscal quarter or the election cycle, some of us focus on our children and grandchildren and the quality of their future. Others consider a RE system as part of their children’s inheritance. And while not as forward-thinking as Native Americans’ concept of Seven Generations, your grandkids are a laudable value for your RE investment. Don’t ever let anyone make light of that.

Another often mentioned reason for installing a wind or PV system is to set an example for the community. Hand-in-hand with this is the idea of your site serving as an educational location for school and scout groups. Anything we can do to help familiarize children and teens with wind and PV systems will influence the decisions they make as voters and utility rate payers when that time comes. Remarkably, most of the younger generation consider renewable energy a no-brainer and wonder why grownups just don’t get on with it.

A surprising number of churches and religious organizations are interested in renewable energy systems as part of their family responsibility and stewardship mission. The nonprofit Interfaith Power and Light has been working nationally with churches of all denominations to embrace renewables, and the Pope’s climate change encyclical boosted these efforts.

There are aspects of RE that politicians do, or at least say they do, value. One is that renewables create jobs. According to a recent National Public Radio report citing figures from the US Bureau of Labor Statistics, the fastest growing occupation in the U.S. projected from 2014- 2024 is wind turbine service technician. While not apropos to home RE, there’s also an astounding growth in the PV installer segment that is. Both are encouraging statistics. It’s noteworthy that the dollars earned from those jobs are spent in local communities (political districts). And since most electricity is currently generated with distantly-sourced fuels of various sorts (the US moves a lot of natural gas and coal, and we still buy hydro from Canada), home-grown electricity keeps dollars local and not exported, never to be recouped. As many states have discovered, renewables are good for their economic strength.

Yet another value of RE often politically touted by various entities is that of customer choice. All of these for the result of a stronger, more diverse, healthier, more robust economy.

According to a recent National Public Radio report citing figures from the US Bureau of Labor Statistics, the fastest growing occupation in the U.S. projected from 2014-2024 is wind turbine service technician.

Putting Your Dollars Where Your Values Are

So your first step in deciding if you want a wind or RE system entails an introspective values clarification exercise, examining why you want a wind system. Energy independence? Lock in future energy costs? Return on investment? Doing your part to mitigate global climate change? Support for the renewables industry? Power an electric vehicle? Set an example for your family and community? Leave a legacy?

Depending on your financial capabilities and goals, you also need to determine how your utility will credit any excess generation. If your utility is liberal and will compensate you at a retail rate for all that you can generate up to a certain capacity cap, then you might install the largest turbine you can afford up to that cap.That was my family’s situation. We were capable of offsetting all of the electricity we normally consumed in our house and shop plus heat our attached greenhouse with an in-floor radiant heating system in the winter, our windy season and when we need the heat the most. With excess electricity still, our future plans will consider an all-electric vehicle when it’s time to replace our hybrid.

If, on the other hand, your utility is far more conservative, you may wish to install a wind system that will offset only a portion of your needs while still making a very visible statement of your values. If you want to serve as an educational demonstration site, the size of the turbine really doesn’t matter. What matters is that you have a turbine, that it operates and generates renewable electricity, and that it offsets a certain amount of utility-generated brown electricity, all the while mitigating the production of (you figure out the amount) greenhouse gasses.

Making the Financial Commitment to Your Values

However you decide to rationalize the purchase and installation of a wind system, remember that this is a decades-long commitment. Wind systems are designed to operate for 20 to 30 years, PV systems longer. As such, you will be incurring expenses for operation, maintenance and repairs over that time, some possibly major. You may even need to call your installer back just after commissioning the system for fine tuning. No one assumes they can buy a car, a comparable investment, and drive it for a decade with no O&M. Nor should you with a RE system.

Mick Sagrillo (msagrillo@ wizunwired.net) has powered his family’s home with all manner of wind turbines for the past 35 years.