Wind and Solar Conspire in Ohio 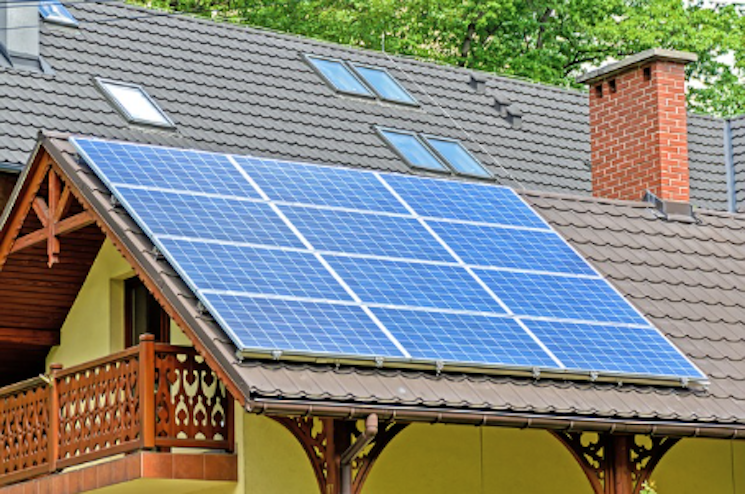 2014 turned out to be a banner year for GEO’s Executive Director Bill Spratley, his wife Faye, and their schnauzer “GEO.” Their home was on the tour for the first time, and therein lies a tale.

In August 2003, Ohio’s First Lady Hope Taft approached GEO about installing a photovoltaic (PV) system on the roof of the carriage house at the Ohio governor’s residence in Bexley, a Columbus suburb. A large tree had fallen in the backyard during a thunderstorm, allowing more sun to shine directly on the roof. GEO’s Green Team installed an all-Ohio 3.2-kilowatt (kW) PV array in September 2004.

Fast forward to June 29, 2012, when an extreme windstorm or “derecho” tore through the Columbus area with hurricane-force winds. In the Spratleys’ Worthington Hills suburban front yard, a top 40-foot fork of a 120-foot Pignut Hickory tree crashed into the street.

Faye Spratley knew an opportunity when she saw it. With the old hickory’s foliage out of the way, the Spratley’s roof received enough sunlight to install a PV system, and they took the plunge.

A few system details:
• The installed cost of the 4-kW system was $15,700 or $3.64 per watt;
• The 16 SolarWorld black 255-watt panels and Enphase M215 microinverters will provide about 4,100 kilowatt-hours per year or one-third of the home’s power; and
• The system can be monitored easily on a computer and iPhone, and the output and carbon offset can be tracked in real time.

The Spratley home is still surrounded on all sides by tall oak, hickory, and locust trees. Using a single-string inverter would have reduced the PV system’s electric output because each string of panels would be affected by shading. They chose the Enphase system of using a microinverter for each panel to convert the DC power to individual AC circuits, which reduces the shading effect and makes the solar system more feasible on their heavily wooded property.

The Spratleys took advantage of the 30 percent residential solar tax credit, which is available at least through 2016. This lowered the final cost of the system to $11,096. They also signed a contract with Sol Systems for the market value of the Solar Renewable Energy Credits from the solar array, which should save them another $200 annually.

If the wind keeps blowing in Ohio, many more residents may be joining the Sprat- leys in their excellent solar adventure. That’s good news for the ASES National Solar Tour and the environment!