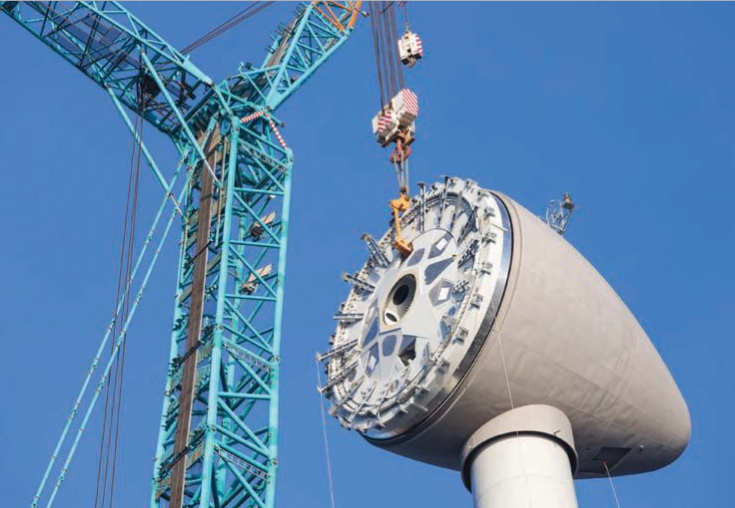 It’s hard to believe that just ten years ago, wind and solar were little more than a curiosity in the U.S.  Today, they are becoming part of everyday life, thanks to investments in research and progressive policies during the Obama administration. It’s now cheaper to build solar and wind farms than coal plants.

As I’m sure you know, that’s the way emerging technologies work: they ramp slowly at first and then suddenly are everywhere. Once they cross critical thresholds, they leap to ubiquity.

Next door, New York State has even bigger plans: 9 GW of offshore wind by 2035.

Last year, the U.S. crossed the 100-gigawatt threshold for wind – adding 75 GW in 10 years. “Wind now supplies clean, efficient power to the equivalent of 32 million American homes, sustains 500 U.S. factories, and delivers more than $1 billion dollars a year in new revenue to rural communities and states,” says the American Wind Energy Association. And 114,000 Americans are employed by the industry.

Over the past decade, costs for solar PV dropped 75 percent and costs for wind energy fell 66 percent, lowering utility bills for many Americans, according to the National Renewable Energy Lab.

Both industries are growing so quickly that the U.S. Bureau of Labor Statistics expects “Solar PV Installer” to be our fastest-growing occupation over the next decade, followed by “Wind Turbine Technician.”

The bad news, of course, is that climate change is also happening at a faster and faster pace, and we have to get to 100 percent renewable energy FAST.

By now, you would think everyone would be aligned and moving in the same direction, but the sad truth is that’s far from the case. Powerful fossil fuel interests continue to hold us back.

Thanks to lobbying by the Koch Brother network and other fossil interests, Congress let renewable energy incentives expire in the last budget, while allowing billions of dollars in fossil subsidies to continue. The GREEN Act, currently moving through the House of Representatives, would revive federal tax breaks for solar and wind for another five years, along with incentives for energy storage and electric vehicles. I’m not optimistic for the bill in the Senate, because Leader McConnell barely moves on any bill.

Meanwhile, this fossil fuel-oriented federal administration is pushing natural gas and oil to its limits, so much so that US emissions could increase 30% in just five years (!), concludes Environmental Integrity Project’s (EIP) report Greenhouse Gases from Oil, Gas, and Petrochemical Production. Thankfully, the effort to boost coal isn’t working – more than 16 GW of coal plants closed in 2019.

“The U.S. is already struggling to meet climate commitments and transition to a low-carbon future,” says Courtney Bernhardt, EIP Director of Research. “This analysis shows we’re heading in the wrong direction and really need to slow emissions growth from the oil, gas, and petrochemical industries.”

As the Department of Energy (DOE), run by a former oil lobbyist, moves to spread oil and gas drilling across federal public lands (i.e., opening national monuments to drilling), it is also holding back $823 million for renewable energy research appropriated by Congress last year. That’s a solid third of the budget.

“There are management and spending anomalies at two DOE offices President Trump has tried to gut every year through his proposed budgets: Office of Energy Efficiency and Renewable Energy (EERE) and Advanced Research Projects Agency-Energy (ARPA-E),” Arjun Krishnaswami, an analyst with the Natural Resources Defense Council, told a House Oversight committee in February. There are repeated delays in issuing research and development grants, and $46 million appropriated for solar research has been cancelled, he says. Staff cuts continue even though Congress has rejected those spending cuts (and outright elimination in the case of ARPA-E).

In more bad news, DOE, which has approved new efficiency standards only after being sued in court, announced new policies that will slow – if not halt – future efficiency improvements in appliances and industrial equipment. And that’s after repealing successfully implemented policies like light bulb standards.

For those of us who understand the threat and pace of climate change, these are very scary times. The saddest part is that we are holding ourselves back from one of the great economic booms of all time and a historic opportunity to increase human health by transitioning to CLEAN energy.