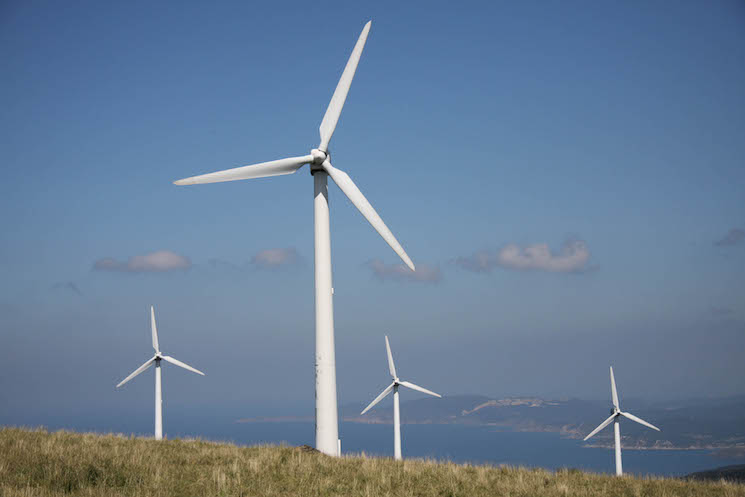 Wind energy pricing in the United Stated is at an all-time low, according to a Department of Energy report prepared by Lawrence Berkeley National Laboratory. The prices offered by wind projects to utility purchasers averaged just $25 per megawatt-hour (2.5 cents per kilowatt hour) for projects negotiating contracts in 2013.

“Wind energy prices—particularly in the central United States— are at an all-time low, with utilities selecting wind as the low cost option,” Berkeley Lab Staff Scientist Ryan Wiser said. “This is especially notable because, enabled by technology advancements, wind projects have increasingly been built in lower wind speed areas.”

• Turbine scaling is boosting wind project performance. Since 1998-99, the average nameplate capacity of wind turbines installed in the United States has increased by 162 percent (to 1.87 MW in 2013), the average turbine hub height has increased by 45 percent (to 80 meters), and the average rotor diameter has increased by 103 percent (to 97 meters). This substantial scaling has enabled wind project developers to economically build projects in lower wind-speed sites, and is driving capacity factors higher for projects located in given wind resource regimes. Moreover, turbines originally designed for lower wind speeds are now regularly employed in higher wind speed sites, further boosting expected capacity factors.

• Low wind turbine pricing continues to push down installed project costs. Wind turbine prices have fallen 20 to 40 percent from their highs back in 2008, and these declines are pushing project-level costs down. Based on the small sample of 2013 wind projects, installed costs averaged $1.63 per watt last year, down more than 60 cents per watt from the apparent peak in 2009 and 2010. Among a larger sample of projects currently under construction, average costs are $1.75 per watt.

• Wind energy prices have reached all-time lows, improving the relative competitiveness of wind. Lower wind turbine prices and installed project costs, along with improvements in expected capacity factors, are enabling aggressive wind power pricing. After topping out at nearly $70/MWh in 2009, the average levelized long-term price from wind power sales agreements signed in 2013 fell to around $25/MWh. This level is lower than the previous lows set back in the 2000-2005 period, which is notable given that wind projects have increasingly been sited in lower wind-speed areas. Wind energy prices are generally lowest in the central portion of the country. The continued decline in average wind prices, along with a bit of a rebound in wholesale power prices, put wind back at the bottom of the range of nationwide wholesale power prices in 2013. Wind energy contracts executed in 2013 also compare very favorably to a range of projections of the fuel costs of gas-fired generation extending out through 2040.

• Looking ahead, projections are for solid growth in 2014 and 2015, with uncertain prospects in 2016 and beyond. The availability of federal incentives for wind projects that began construction at the end of 2013 has helped restart the domestic market, with significant new builds anticipated in 2014 and 2015. However, as noted by Mark Bolinger, Research Scientist at Berkeley Lab, “Projections for 2016 and beyond are much less certain. Despite the attractive price of wind energy, federal policy uncertainty—in concert with continued low natural gas prices and modest electricity demand growth — may put a damper on medium-term market growth.”

The full report (“2013 Wind Technologies Market Report”), a presentation slide deck that summarizes the report, and an Excel workbook that contains much of the data presented in the report, can all be downloaded from: emp.lbl.gov/publications/2013-wind-technologies-market-report