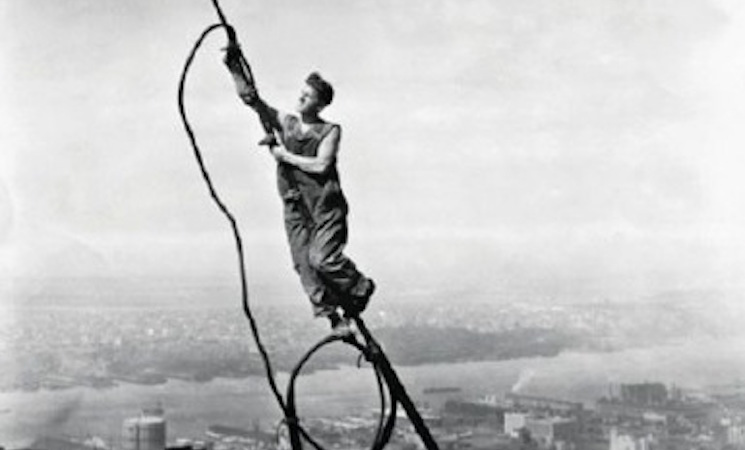 Note: This is no longer OSHA-approved worker behavior on a tower. Photo: Lewis Hine/WPA

Small wind turbines, on tall towers with spinning blades and electrical generators, are often portrayed as inherently dangerous. Indeed, three people have fallen to their deaths while working on small wind systems (one 32 years ago, one 20 years ago and one only two years ago), and one person was crippled in a fall.

Yet, despite these four ghastly accidents, small wind has a remarkably good safety record compared to other trades. One reason might be natural caution triggered by heights. Towers used in small wind, typically from 80 to 140 feet tall, are often admired by visitors, but are intimidating even to experienced workers.

Part 1 of this series appeared in the July/August 2013 issue: Before Climbing That Tower

1.    While one person is sufficient to inspect a wind system and tower from the ground, at least two people must be on site when tower climbing or tilting a tower.

2. Use OSHA (Occupational Safety & Health Administration)-approved safety harnesses and gear. Anyone who wears a climbing harness must be trained in how and why the safety gear works, and must know its limitations.

3. Before starting any job, gather the crew to discuss the work plan, what to expect, who will be responsible for which tasks, parts and tools needed for the job, and what to do in case of an emergency. Organize parts and tools before leaving the shop to avoid time-consuming searches at the job site.

4. Subcontracted services such as concrete work or backhoe, forklift and crane operation are part of most installation jobs. These contractors may be familiar with tower work, but have probably never worked on a small wind tower or turbine installation. When subcontractors arrive, walk them through the task at hand and their responsibilities. While they may be accustomed to working at a frenetic pace so they can get to their next job, remind them that this is not a race. While time is a consideration, it is not the essence of the job. Safety is.

5. Regardless of seniority, the person on the tower doing the work is the person in charge. The ground crew is the support crew for tower-top work. Never advise tower workers from the ground based on a guess about what might be happening atop the tower. Let the tower workers call the shots — unless, of course, a ground crew member spots something unsafe, and someone is in danger.

6. Refrain from tower work when winds top 25 mph, when it’s raining or icy or when lightning threatens. Thunder is the planet’s way of telling you to get back on the ground.

7. Never intentionally drop or throw anything from the tower. Send it down the way it came up. Use ropes and pulleys to raise and lower equipment, or pack parts and tools up and down the tower. Dropping or throwing can all too easily become a bad habit with dire results for anyone below. More than one person has been bruised by something as inconsequential as a roll of electrical tape falling from 80 feet. Pay attention: 32 feet/second2 (acceleration due to gravity) happens remarkably fast — an 80-foot drop takes less than 2.5 seconds. By the time a tower worker reacts to a falling object and yells “Heads up!” and the person on the ground hears and interprets that message, the accident has already happened.

8.    Head gear is not for appearances. Hard hats are fine for the ground crew, but climbers need helmets with chin straps.

9.    No one is allowed to work directly under the tower when up-tower work is being performed, even if wearing a hard hat or helmet. A hard hat might protect you from a head bump, but it offers no protection from a wrench or bolt dropped from 120 feet.

10. If you’re uncomfortable with or don’t understand the task assigned to you, speak up and ask questions. If you are unsure of your capabilities, you may jeopardize yourself or someone working with you.

11. Anyone on the crew has the authority, and the responsibility, to stop work at any time if unsure of what is going on, or if he or she feels the situation is unsafe.

12. Discourage visitors and onlookers. Anyone not directly involved in the work is to stay at least twice the tower height away from the base of the tower (the “work zone”). This includes dogs and the media, and is especially true when a crane is on site, or a tower is being tilted up or down.

13. Cell phones and texting are only allowed for job-related communication.

14. Never work on a wind system when you are tired, have consumed too much caffeine or sugar, or have alcohol or drugs in your system.

15. Always remember that Constance, the Goddess of Gravity, never honors requests for a second chance.

Mick Sagrillo (msagrillo@wizunwired.net) teaches and consults about wind power, and has powered his home with wind power since 1982.