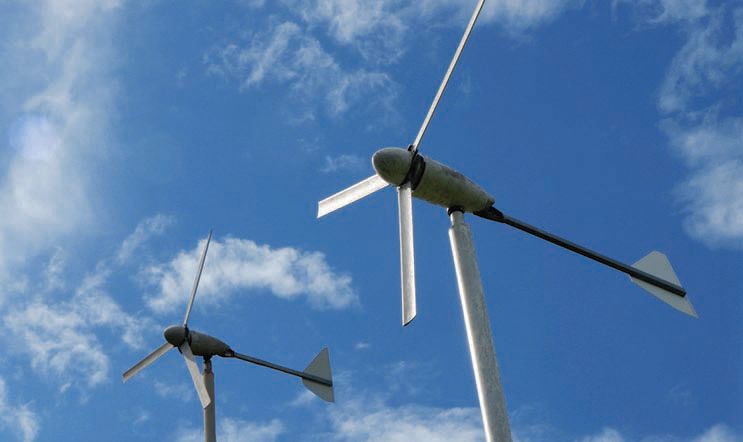 The only variable that an installer has to optimize production at the typical small wind site is to increase tower height, or vertical separation. © apisitwilaijit29

As a small wind site assessor, I’ve watched with envy as wind farm developers prospected new locations for their proposed installations. They engage in what I call “the blank map approach.”

First, developers look at the wind maps developed by the National Renewable Energy Laboratory for their areas of interest. At this point, they consider only areas with very high wind speeds mapped at 80 or 100 meters (240 to 300 feet) above the surface of the earth, approximately their turbines’ tower height. Next, they access GIS mapping data for open agricultural areas. What they are looking for are largely open areas devoid of residential development, fence rows, and trees. Trees cause atmospheric turbulence on the wind turbines’ landscape, while residences cause a different sort of “turbulence” for wind farm developers (protests and other backlash). In addition, permitting is typically easier in areas with little to no residential zoning. Finally, developers check plat maps for ownership. The fewer landowners that they have to contend with, the fewer contracts that have to be negotiated. If a given area gets too complicated for whatever reason, the wind farm developer simply moves on to easier pickings.

Don’t get me wrong; siting a wind farm is certainly a complex and careful process. However, wind farm developers are able to cherry-pick the sites with the very best wind resources and the least complex sites, all of which means that they can maximize their return on investment. Make no mistake: these are electric power plants owned and operated by large companies or corporations. Profit is the bottom line. (This is not a blanket inclusion of all the smaller companies and entities that install megawatt wind turbines for various environmental or altruistic reasons, which might also include reducing their carbon footprint as well as their operating costs.)

One of the primary considerations for wind farm placement, besides the wind resource, is the horizontal separation between trees, buildings (especially residences), hills and valleys, and other ground-based obstacles, all of which complicate the smooth flow of the wind across the landscape. Think of the flow of water in a stream or river. Open water flows smoothly and fast. Throw in some boulders, fallen trees and stumps, pilings and docks and you induce a lot of swirling eddies or turbulence. Wind generator blades spin due to lift, and turbulence means trouble for the blades, the turbine, and electricity production. This is not desirable, especially given the investment.

Small wind turbine installers, on the other hand, deal with homeowners, businesses, or schools that are situated on a specific piece of property. The installer is “stuck” with the specific real estate that the owner occupies. And that piece of property is stuck with a given wind resource. That wind resource will likely vary over the course of the year, but the average annual wind speed is more or less fixed at that location. In addition, most folks who are interested in a small wind turbine (defined as up to 100 kW in nameplate capacity) usually don’t own hundreds of acres to choose from for siting their turbine. Several to tens of acres is more the norm. The installer is also stuck with the obstacles on the site: the house and other buildings, the trees, and any terrain features. Zoning setbacks from property lines further limit siting options. The installer is more or less stuck as to where on the property to locate the tower. Horizontal separation, as is done with wind farm layout, is not an option. What to do? (See diagrams below) 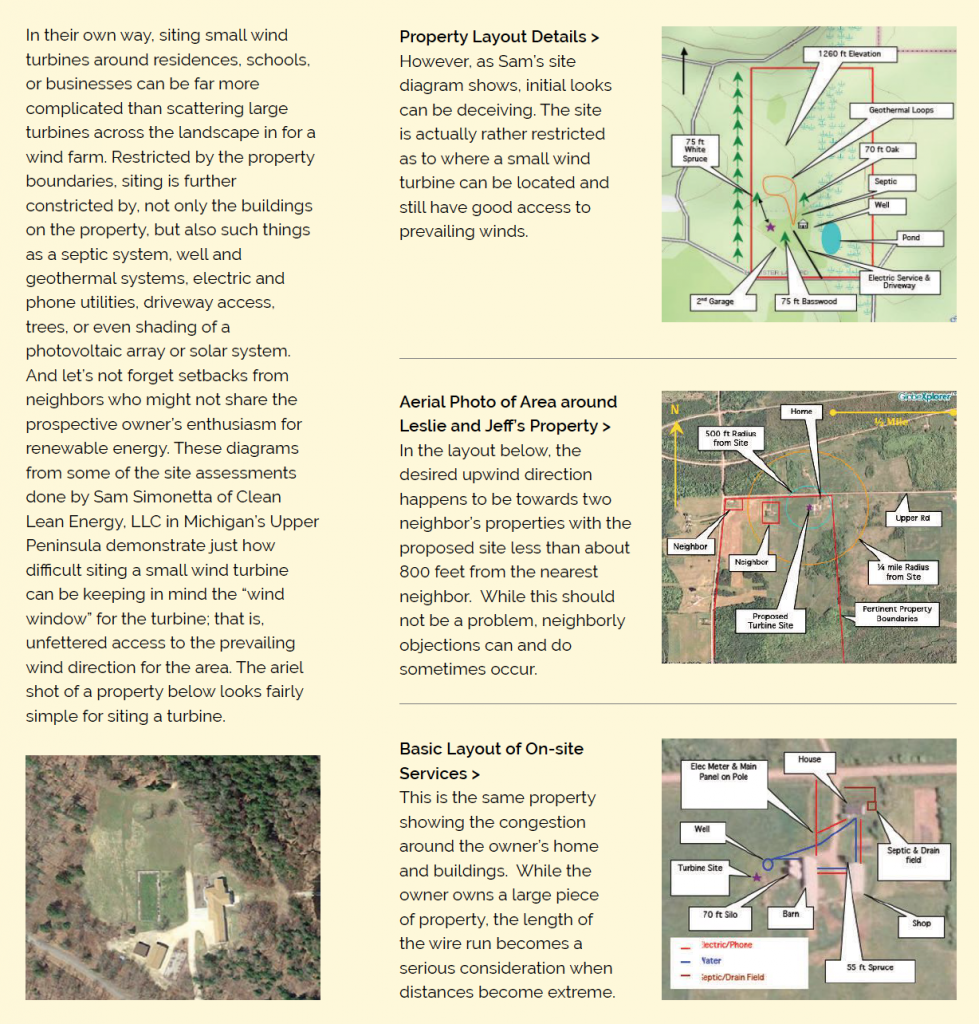 The only variable that an installer has to optimize production at the typicalsmall wind site is to increase tower height, or vertical separation. Clients don’t like to hear this because it may mean more visibility of the system by neighbors, resulting in potentially more permitting concerns. Oh, and more cost. Invariably, however, the only solution to maximizing turbine performance given the siting restrictions posed by the typical small wind turbine location is a taller tower. As installers say: “More tower, more power.” And more energy produced.

However, homeowner motivation for installing a small wind turbine is not necessarily return on investment but expression of other personal values. It may be setting an example for the neighborhood. Or serving as an educational demonstration site. Or leaving a legacy for the family. Or mitigating climate change and reducing carbon footprint. Or locking in future energy bills. Or energy independence.

Regardless, all of these depend on an operating wind system. If the turbine is a poor performer or is in constant need of repair as a result of turbulence at the site (both due to too short of a tower), the owner will soon tire of spending any money at all on operation and maintenance. When, and not if, the turbine falls into disrepair and becomes inoperable, what message will be sent to the community about small wind, or about renewable energy in general?

In another lifetime, I owed a small wind installation company at a time when many other small wind companies were going out of business. We frequently received phone calls from wind turbine owners who needed service or repairs on their systems. We’d interview these prospective clients to document the systems’ backgrounds, but also to determine if we wanted to get involved with their systems. All too often “free electricity” also meant “free service and labor” to the system owner, something no small business can support, so we were weeding out potentially problem owners. I was also curious what mistakes were made by the companies that had gone out of business so that we did not make those same mistakes. The question we posed was, “If you had to do it all over again, what did you do wrong that you would do differently the next time around with your next small wind turbine?” The three top mistakes were:

1. We installed too short of a tower. Next time we’d install a taller tower.

2. Our tower is too short. Bad decision on our part.

Never once did anyone say, “We bought a blue one and next time we’d buy a yellow one.” It was all about the tower height. And yet, when sitting down with a sales person, the obvious place to cut costs if need be was on the tower height. And that’s what all too many people did with a similar outcome. 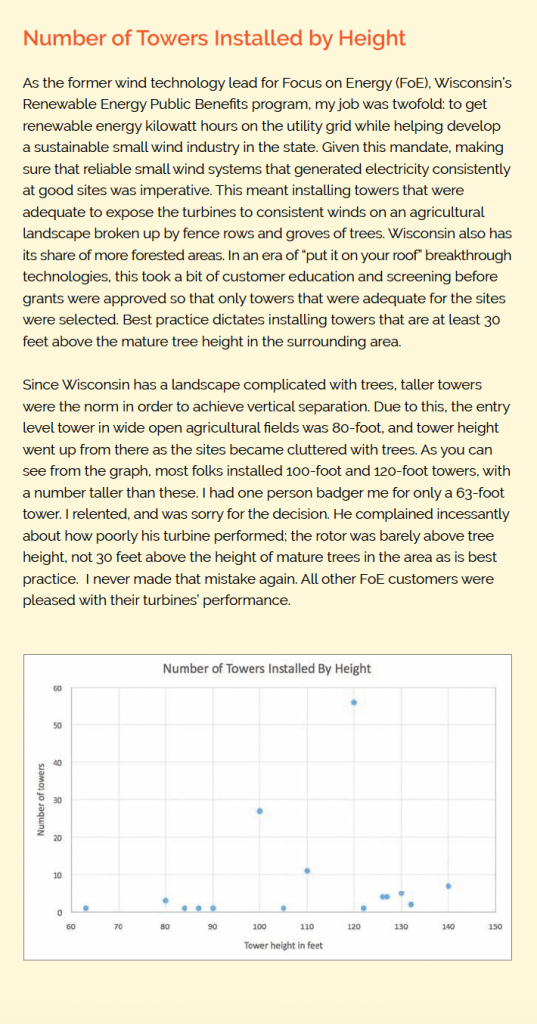 What happens is turbines on short towers are victims of turbulence, meaning they are in need of more frequent repairs as well as being poor performers. Given this double whammy, owners invariably give up on the turbine and abandon it on the tower. Now what value statement is being broadcast to the community by an inoperable small wind system?

Later in my career, I was the wind technology lead for Wisconsin’s public benefits program Focus On Energy. The program was designed to maximize renewable energy system production. You do that with small wind turbines with…taller towers. The entry-level tower in our state, an agricultural state bisected by fencerows and groves of trees, was 80 feet. We funded very few of them. Most people opted for 100 foot and 120 foot towers, with a few going for 140 feet. The program had successfully demonstrated the value of tower height (vertical separation) in optimizing small wind turbine performance. We had successfully conveyed the concept of cost versus value relative to wind turbine tower height to our potential small wind turbine owners, and they purchased accordingly. (see sidebar) That vertical separation via a tall tower will make all the difference between a small wind turbine installation that is prematurely abandoned as a poor investment and one with a long productive life.

Mick Sagrillo (msagrillo@wizunwired.net) has powered his family’s home with all manner of wind turbines for the past 35 years.

One Reply to “The Siting Conundrum for Small Wind Systems”