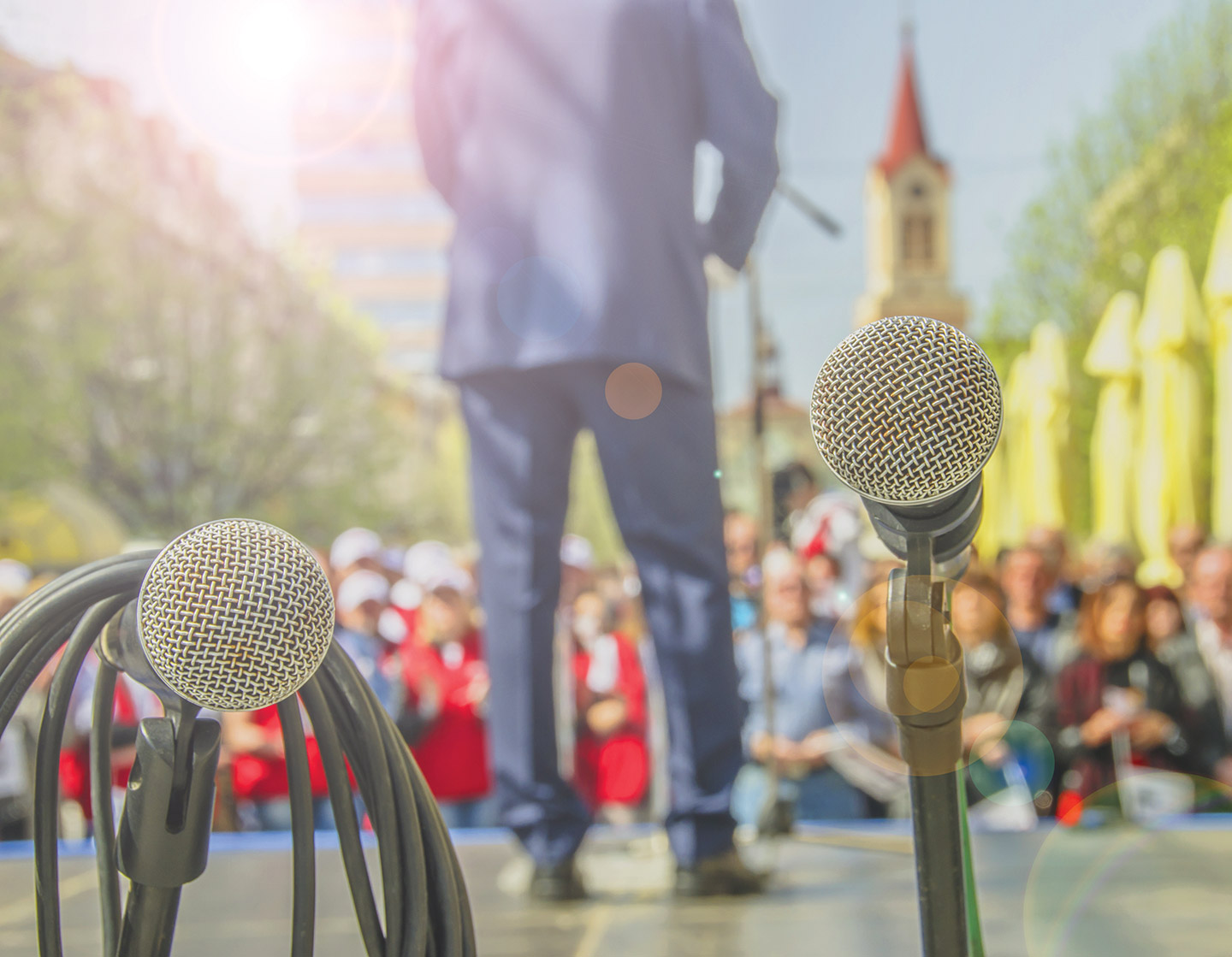 Even though 80% of voters want to see more use of solar within the US, only 54% would vote for a candidate specifi cally because of his/her position on global warming. © vladimirnikolic

No longer just a “liberal thing,” solar is being embraced by consumers across the political spectrum, but does it influence actual votes cast?

It has become clear that specific solar issues can draw out constituent support from both Republicans and Democrats, as well as Independants, when the issue stands on its own. Attacks on net metering draw crowds at public comment sessions, as do punitive fixed fees and other measures that are viewed as anti-solar.

While the reasons for support can vary widely (we’ll get into that more in a bit), the support for solar-friendly policies is clear among the general public. When a solar issue is on a statewide ballot, it can garner multi-partisan support as well. I saw this personally in Florida in 2016 when I worked on a pro-solar tax abatement initiative that appeared on the primary statewide ballot (and won with a resounding 73% of the vote) and then again in November when an anti-solar initiative was firmly beaten on the general election ballot.

But what about candidates who are trying to get elected? Can their stance on solar make or break their election campaign? So far… probably not on its own, but it can defi nitely help distinguish a candidate from a competition, especially in primaries, when a handful of important priorities can help sway votes when candidates are otherwise closely aligned.

Recent research shows that topics such as clean energy, solar, climate change, and the environment are becoming more important to voters, all voters. Earlier this year, research conducted by the Yale Program for Climate Change Communication and the George Mason University Center for Climate Change Communication (http://bit.ly/2Q2OzGe) found that 59% of all registered voters believe that global warming is caused mostly by human activities (Fig. 1), while 73% acknowledge that the globe is warming and 63% were actually worried about it .

The same research found that even among the most conservative of Republicans, concern over global warming has increased seven points since October of 2017. It seems that while many registered voters are paying attention to global warming and worried about its impacts, they are also becoming increasingly receptive to solutions and mitigation measures, such as implementing more solar energy. Around 87% of registered voters supported funding research into renewable energy sources such as
solar and wind power (94% of Democrats, 83% of Independents, and 79% of Republicans), and 86% support generating renewable energy on public land (91% of Democrats, 82% of Independents, and 81% of Republicans). Tax rebates also had bipartisan appeal, supported by 85% of registered voters (91% of Democrats, 82% of Independents, and 77% of Republicans). The less popular issues, but still supported by a bipartisan majority, were unsurprisingly regulation based, including things like carbon fees and strict emission limits. 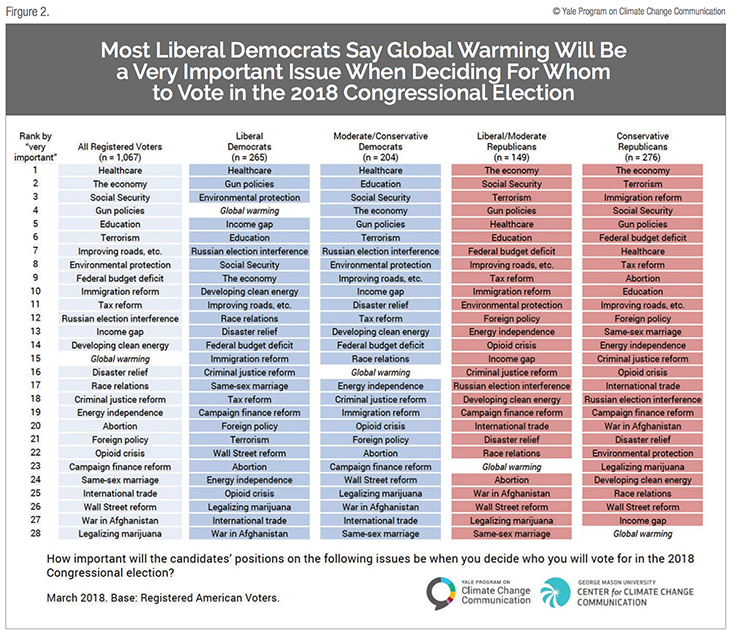 Some voters are putting their money where their mouths are, voting for candidates specifically because of their position, but for many others it is simply one issue on a list of many topics voters want to see addressed. According to the research, even though 80% of voters want to see more use of solar within the US, only 54% would vote for a candidate specifically because of his/her position on global warming. Even fewer people (a paltry 13% of registered voters) have contacted an  elected official in the last 12 months to ask them to take climate related action. That 13% stat includes only 21% of voters who classify themselves as Liberal Democrats.

The research asked registered voters to rank what issues were most important to them, and out of 28 issues ranging from same-sex marriage to campaign finance reform, to improving roads, global warming ranked 15th most important overall, 4th most important for Liberal Democrats, and dead last for Conservative Republicans (Fig. 2). In other words, climate change matters to voters, but as the level of engagement increases from simply caring about it, to casting a vote, to entering into dialogue with elected officials about the issues, the numbers drop off dramatically, drastically more so for Republicans, indicating a lack of real political will that politicians would be expected to respond to.

A similar poll conducted only in Florida by the USA Today Network and the Florida Atlantic University’s Business and Economics Polling Initiative painted a bleaker picture, in terms of voters caring about environment issues and solar specifically (http://bit.ly/2zrkYke). Among registered Florida voters, an
average of only 12% said that environment was the most important issue, falling behind school safety (20%) and the economy (25%). (Fig. 3, p. 10) Only 5% of registered voters said that adoption of renewable energy was the most important issue facing Florida when it comes to the environment, which tells a different story than the 73% of voters  who supported the pro-solar initiative in Florida that I mentioned earlier. On the other hand, 30% said that climate change was the most important issue concerning the environment, so depending on how a respondent viewed the question, those numbers could be interpreted a few different ways. 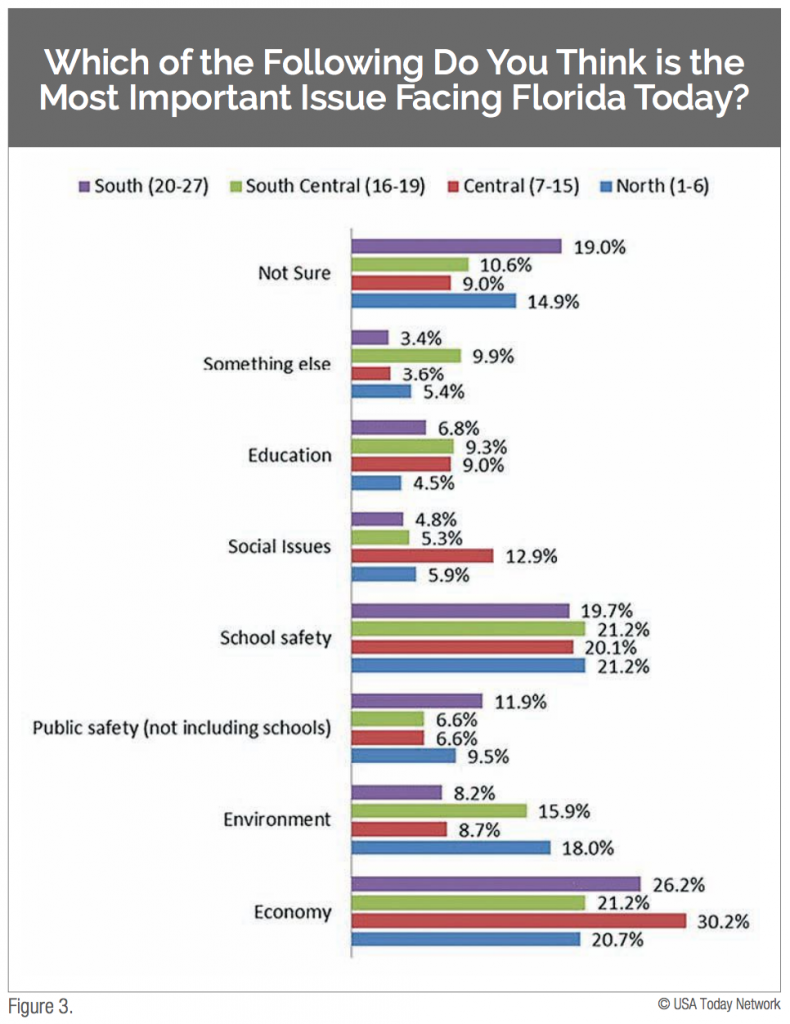 It’s also interesting to note that solar can (and should be) included in the economy discussion, which was the most important issue to 25% of Florida voters, and number two on the list of 28 issues for registered voters nationally. (There is also a strong public health angle, which was the number one issue in the national poll.) Outside of candidate elections/platforms, solar in and of itself enjoys multi-partisan support largely because of its economics angle. When taken out of the global warming/climate change frame, solar is more about business and economy than anything else. It is a both a product and a service, with a huge industry (jobs! with good wages!) behind it and countless applications and reasons for people to pursue it. Businesses may choose to go solar to reduce their operating costs while simultaneously cashing in on the marketing appeal of using new technology to power their facilities.

The examples go on and on, and none of them have to do with political party affiliation or climate change. Because of this wide range of motivations behind solar, I feel hopeful that solar will not only continue to do well when it is up for debate on its own, but also that candidates on both sides of the aisle will begin to embrace solar as a part of their platforms during campaign season and as a policy priority once elected. As advocates and members of the industry, the burden, and opportunity, are on us to continue to raise the profile of solar. I think one of the next steps needs to be publicly making the connection between a clean energy future and so many of other issues that voters care about, such as the economy and public health. We have a lot of work ahead of us, and the sooner we can recognize the intersectionality of it all, the better.

I’d love to hear your thoughts on this topic, especially as we head into into
mid-term elections in November.

About the Author
Alissa Jean Schafer is Solar Communications and Policy Manager for Southern Alliance for Clean Energy, a regional non-profit organization that promotes responsible energy choices that work to address the impacts of global climate change throughout the Southeast.