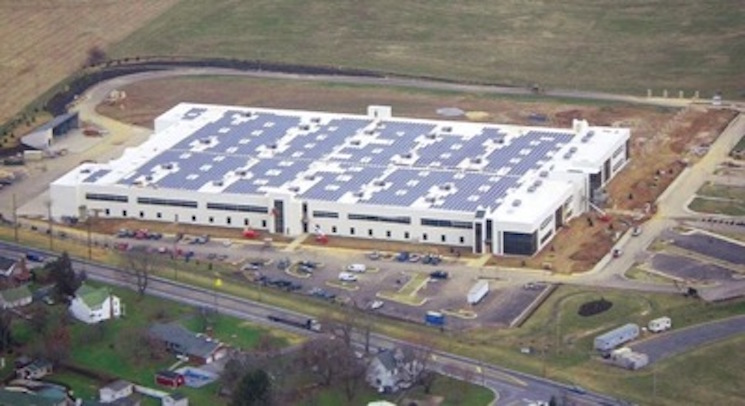 Knorr Brake Corp. (KBC) is the U.S. division of a family-owned German manufacturing company. It specializes in brakes, electronic controls, automatic doors, HVAC and maintenance services for mass-transit rail, and for the trucking industry.

When the time came to relocate and double the size of one its five U.S. factories, KBC chose a location in Westminster, Md., and planned for LEED certification. Planning began in 2011, with groundbreaking in January 2013. Work went swiftly, thanks largely to collaborative planning by the contractors. Standard Solar won the contract for the 865-kilowatt photovoltaic array, to go on 235,000 square feet (21,832 square meters) of flat roof.

The galvanized steel roof was covered with four inches of insulation, hardboard and a TPO membrane — ideal for a PanelClaw Grizzly Bear ballasted racking system. The problem: 20 skylights and 20 HVAC units with associated conduit and ducting.

Standard Solar’s project manager Scott Baxter reports his team worked closely with the architects and engineers designing the roof and conduit alley; they went to meetings and exchanged files with the general contractor and with UGI, the HVAC contractor. A layout emerged for 2,882 300-watt Suntech STP modules, with no shading from the HVAC housings. HVAC and solar-array conduits were carefully coordinated. The system fed power to two Advanced Energy 500 inverters.

Because of the advance planning, array construction took just two months, with an average of 10 people doing structural work and six to eight electricians. The system was commissioned just before the Christmas holidays, but it didn’t produce full power until interior work was completed, and the building opened, in early May. Preliminary data show the system on track to beat its target of 1,154 megawatt-hours annually. — SETH MASIA