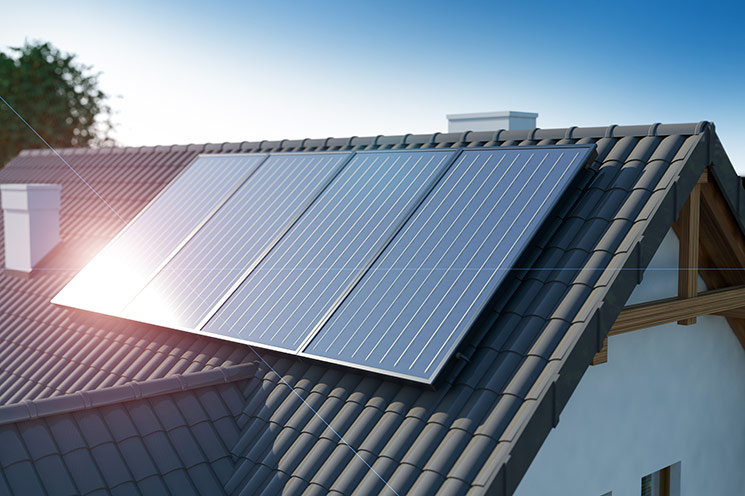 My Massachusetts-based company, Transformations Inc., had already built several double-studded homes with Home Energy Rating System (HERS) indexes as low as -4 when MassDevelopment, the state’s finance and development authority, was looking to showcase sustainable housing in 2009. It issued a request for qualifications for developer/builders to design and build moderately priced single and multifamily homes at its Devens, Mass., residential community. The goal: to provide an example of sustainably built zero or near-zero-net-energy housing that was practical and replicable in the state.

At Transformations, we enjoy being on the creative edge of energy-efficient building, and part of our mission is to share what we learn with others. The MassDevelopment project presented an opportunity to take things to the next level — to continue the innovations and help get the word out on affordable zero-energy and energy-positive homes. We seized that opportunity. Here’s the story.

I had been out to the Wisdom Way Solar Village in Greenfield, Mass., after the utility-sponsored Zero Energy Home challenge program resulted in zero  and near-zero-energy homes being built there in 2008. Wisdom Way had taken third place in the competition. (We had taken second place, in an experience I detailed in these pages; see “The Zero Energy Home Challenge,” November/December 2008 issue).

The Greenfield homes were well-built and achieved low HERS Indexes — many around 10. There was an open house for the project, so I made a field trip out for the day.

One of the things I noticed in literature about Wisdom Way was a six-figure amount of engineering assistance from the U.S. Department of Energy’s (DOE’s) Building America Program — provided at no cost to the developer. Building America is a public/private partnership working to accelerate the development and adoption of innovative building processes and technologies for production housing.

I contacted Betsy Pettit, president at Building Science Corp. (BSC), and asked her if Transformations could get assistance under the same Building America Program. BSC leads another one of the program’s five teams and has company offices just a short commute from two of our projects. Many of its staff members have considerable experience with energy-efficient enclosures. I proposed to advance zero-energy homes via the Devens sustainable housing project and two other Transformations developments. Betsy agreed and proceeded to line up talent within her company to work on the project: Kohta Ueno, Daniel Bergey and Honorata Wytrykowska.

We started with a charrette including 10 engineers and four architects in September 2009. I had invited several building science engineers and architects with whom I had worked in the past — Marc Rosenbaum, Mark Kelly, Mike Duclos, Ben Nickerson and Paul Panish. In addition, Rick Gilles, Bryan Urban from Fraunhofer USA and Luke McKneally from Solar Design Associates came out to help. Joe Lstiburek and John Straube rounded out BSC talent at the charrette, which took place at Joe and Betsy’s barn in Westford.

We used the 2008 Farmhouse model, a Transformations design that had been built in Townsend, as a base model and picked it apart. We were looking for ways to increase efficiency, bring down costs and improve the aesthetics of the homes. It took five hours to get through about 25 slides with all of the group’s intense conversations! Ventilation (using a heat-recovery ventilator vs. bathroom exhaust fans), keeping the basement in the thermal envelope and roof-integrated PV (leaking concerns, cost concerns) were among the topics we discussed.

Following the meeting, we came up with three designs of two-story homes plus two designs with first-floor masters. We submitted the resulting proposal to MassDevelopment, and Transformations Inc. was chosen in February 2010 to build the single-family project with a total of eight homes. After a lengthy due diligence period, we began construction on the first two homes in the summer of 2011. The first home was sold by October. By October 2012, all eight homes were sold or under agreement. We had planned on a 3.5-year build out. The combination of zero-energy homes and the great Harvard public schools seemed to be a potent combination.

Getting to Zero Energy

All of the home designs started with our standard super-insulated shell. We built 12-inch-thick double-studded above-grade exterior walls. We used 2x4s 16 inches on center (OC) for the outside walls, a 5-inch gap and 2x4s at 16 inches OC for the inside walls.

We added about 3.5 inches of high-density (closed-cell) foam on the basement foundation walls for an R-value of 20 (R-6 per inch) and put 2 inches of rigid XPS under the slab for R-10. This tactic was a result of the charrette and the analysis with BSC.

We used triple-glazed windows with a U-value of 0.21 (about an R-5 window — mostly from Harvey Industries).

For hot water, we used Betsy’s suggestion for a propane-fired Navien instantaneous water heater in the basement.

For heating and cooling, we used Mitsubishi dual-stage air-source heat pumps (MSZ-FE12NA indoor units and MUZ-FE12NA outdoor units). These units have a 23 SEER rating for cooling and a 10.6 HSPF rating for heating. They put out 92 percent of their rated capacity at 5°F (-15°C) and 58 percent at -13°F (-25°C). We choose these mini-splits for their price (~$3,000 installed per floor), efficiency and reliability.

We modeled the homes with RemRate software and found they produced a HERS index of around 40. To get toward zero energy, we typically added a 7.92-kilowatt (kW) photovoltaic (PV) system on the roof.

The Greek Revival, Victorian and Farmhouse designs had the gable end to the street so the long roof could face to the south. We wanted to have a good street view of the home and maximize the solar generation. These homes have three bedrooms as a standard, with an additional bonus room that could be finished later as a fourth bedroom, office or recreation room. HERS indexes came in at 7 and 8 on these designs.

Without the bonus room in the heated envelope, the HERS index came in at 0. Twelve months of electric usage on the Greek Revival home showed a net-positive energy production of 369 kilowatt-hours (kWh) after accounting for the propane use for hot water.

And Then to Energy-Positive Homes

With a net-zero-energy home, you solve your share of the 48 percent carbon emissions that come from the U.S. building sector — and you don’t have any utility bills to pay. We now can go beyond this goal and start to address the 33 percent of carbon emissions generated by the overall U.S. transportation sector!

By increasing the roof area relative to the living area, Transformations was able to build homes that produced considerably more energy than they use. The lots were oriented such that the backsides of three homes face south. We evaluated the traditional forms and decided that the ranch and saltbox styles could take best advantage of this roof area.

These homes allowed a first-floor master bedroom, which was becoming more popular. They also accommodated PV systems on the backs of the garages, as well as the main roofs. We completed a customized version of a saltbox model last spring. It had an 18.33-kW PV system, comprising 78 235-watt Canadian Solar panels. The final certified HERS index was -21. It was projected to produce 10,200 kWh more than it consumed in a 12-month period. That was enough additional energy to power a Nissan Leaf or Chevy Volt for more than 30,000 miles, given an average of 0.33 kWh per mile.

We built another saltbox, the Wayland model, on speculation and it sold for $360,000 late last summer. It had a first-floor master bedroom and two additional bedrooms upstairs. It had 16.31-kW PV system — 68 240-watt Canadian Solar panels — and a HERS index of -37.

The 12-inch-thick walls have a nice bonus benefit: Not only do they reduce energy usage, but during winter power outages, they enable the house to coast gently down in temperature. One of our homes in Townsend experienced a power outage for seven days in a December 2008 ice storm. Data loggers at the house showed that in an eight-hour overnight period, with the temperatures in the 20s outside, the home lost only 3.6°F. Many homes in town had broken pipes from the power outage. We were lucky to avoid those problems with the super-insulated airtight homes.

As a further resiliency feature, we now can offer a way for the car to act as a backup generator when the grid goes down — with vehicle- to-home backup power. I recently purchased a 2-kW “Plug Out” inverter that runs off of my Prius. This allows powering of my essential loads during power outages.

How do 12-inch-thick walls perform over time? What happens with moisture in these walls? How does the low-density foam compare with cellulose? Are homeowners comfortable with one-point source heating and cooling per floor? How is air infiltration reduced in these homes?

BSC recently submitted to the National Renewable Energy Laboratory a 70-page technical report to answer these questions. The study confirmed our suspicion that the cellulose walls would contain more moisture than the low-density foam walls (28 percent vs. 18 percent in the north wall). It also confirmed that most homeowners were comfortable with just one-point heating and cooling per floor.

Changing the Game with Affordable PV

Since the first Zero Energy Challenge home we built in 2008, three game-changing events have occurred.

The second game-changing event was the solar renewable energy credits (SRECs) market. Many states have an SREC program. Massachusetts introduced its SREC program in 2010. We have a well-designed system with checks and balances that support the solar electric market. Currently the SRECS are good for 10 years and can produce another $30,000 or more over time for one of the larger systems. (More detailed information on the Massachusetts SREC program can be found in my November/December 2011 SOLAR TODAY article, “Making NET ZERO Affordable.”)

The three occurrences produced a positive “perfect storm” in the zero-energy-home world. Now it usually makes economic sense to install as big a solar electric system as the home’s roof will allow. The result is that new homes can be a huge positive impact on carbon emissions. We can cost-effectively create homes that generate much more energy than they consume! In 2005 we were installing 1.2-kW and 2.4-kW systems on homes and achieving HERS 50, enough to win an Energy Star Custom Builder of the year award for the New England region. Just seven years later, we can achieve HERS Indexes 87 points lower, with better envelopes and 16.32- kW to 18.33-kW solar systems!

Such a paradigm shift made the difference in transforming our charrette team’s net-zero-energy designs into energy-producing homes.

The Devens project has been a resounding success on many levels. These homes met the goals of the MassDevelopment program, which was pleased with the aesthetics, the pace of the homes sold and the energy efficiency. It sponsored two zero-energy-home workshops to help educate other builders and developers. The buyers were happy with well-built homes and little or no energy bills, and in some cases, credits of more than $100 per month. The DOE extended the Building America Program for BSC to continue our work together. Transformations was pleased with another model community designed and built to advance energy-efficient construction in the Northeast.