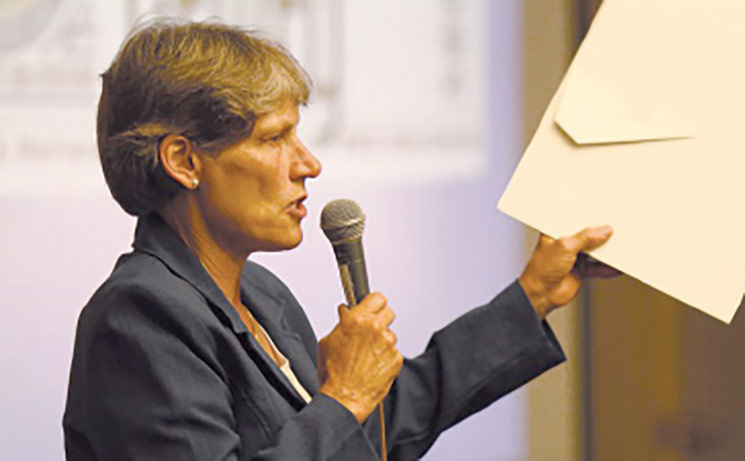 Leslie Glustrom, the biochemist who founded Clean Energy Action (CEA), has been hounding coal-powered generating plants since 2004, because coal plants are the leading source of greenhouse gas emissions — and the biggest impediment to the adoption of carbon-free energy sources. She organizes local action to confront utility companies, public utility commissions and city councils with an eye to the economics and environmental benefits of renewable energy.

The coal business is in a profit squeeze. Every year the cost of coal goes up a bit, to help pay for the rising cost of digging the stuff out of ever-deeper holes. But severe price pressure from natural gas and renewables means the price can’t go up fast enough: In the Eastern states, it often costs more to mine coal than it can be sold for. The country’s largest coal mines are probably past their productive peak. The Black Thunder mining complex in Wyoming, which provides almost 10 percent of our country’s coal, has less than 10 years of recoverable coal in its existing pits.

According to data from the Energy Information Administration (EIA), the average price of coal delivered to U.S. power companies rose by an average compound rate of 8.75 percent per year from 2004 to 2011, two to three times faster than inflation. Under strong pressure from natural gas costs, coal costs leveled off nationally in 2012, but Glustrom predicts they will rise in future years as the costs to produce and transport coal mount steadily. Glustrom has notebooks full of government-gathered data supporting the idea that coal is in a hole, and likely to stay there. But utility companies and their regulators often don’t get it. Many officials are convinced that the United States has enough coal to last for centuries. Well, we do. But no one can dig it up at a profit. Glustrom says that the crossover point, when gas becomes cheaper than coal, is right now. Clean Energy Action offers training and support to anyone who wants to take down local coal plants through local action.

Accordingly, Glustrom pursued a career at the interface of science and society. In 1977 she began working for Wisconsin’s Legislative Council, providing nonpartisan research to the state Senate and House.

In 1983, with her husband Merrill, Glustrom moved to Prescott, Ariz. She taught chemistry, biology and environmental studies at local colleges, while raising two kids. The couple built a solar-powered home. And she got involved as a land-use activist, pitching reform of off-road vehicle and grazing practices on public lands.

In 1996 the family moved to Boulder, Colo., where Leslie ran a research lab at the University of Colorado, investigating the interactions between nucleic acids and proteins. From afar, she watched as the bark beetle arrived in Arizona, in 2002, killing thousands of acres of trees in her beloved Prescott National Forest.

“I’d been teaching about climate change, but that motivated me to read the scientific literature more carefully,” Glustrom said. “I learned the scientists had long been predicting severe forest loss and an increase in extreme weather events as we intensified the water cycle — just the impacts we were starting to see. I started to understand how profoundly serious the tipping points in the cli- mate system are. I began to think about the impacts on our children and grandchildren and on down for many generations. If I didn’t do something about it, I felt I wasn’t much of a mother.”

So in 2004 Glustrom resigned her lab job and by 2005 had Clean Energy Action up and running. Xcel Energy was planning the huge new Comanche 3 coal plant in Pueblo, Colo., and Glustrom, with much help, took that on. The new 750-megawatt coal plant would be allowed to emit more than 2 pounds of mercury a week, consume millions of gallons of water a day and emit quantities of carbon dioxide each year equivalent to nearly a million passenger vehicles. She also questioned the economic viability of the plant in view of rising coal costs. She raised the serious question of the mining industry’s ability to provide coal for Comanche’s planned 60-year life. In the end, in what Glustrom calls “a billion dollar mistake,” Xcel did build Comanche 3.

CEA also opposed plans to build a “clean coal” plant in Colorado, and instead advocated for renewable resources like concentrating solar power (CSP). Xcel’s CEO at the time, Dick Kelly, chose to abandon the clean coal project, and instead moved ahead with CSP. The Colorado CSP effort was halted by the refusal of a large local landowner to permit the necessary transmission lines to cross his land, but Kelly is now chairman of the board for CSP developer BrightSource Energy.

“It was an historic moment,” says Glustrom. “If Xcel had moved ahead with a clean coal plant, a lot of other utilities would have followed suit.” That set CEA up to go after existing coal plants, lobbying to replace them with efficiency programs and renewable energy. In addition, CEA helped lay the foundation for the city of Boulder to consider municipalizing its grid, in order to decarbonize its electricity supply. Glustrom encourages citizens across the country to do likewise. “Every municipality has a deal with an electric utility, and electricity is often the largest source of greenhouse gases produced by the community. You may not have access to your congressional representatives, but you do have access to town council members and you can influence them to take responsibility for the community’s carbon emissions. And if you can’t win with the climate issue, you can soon win on the affordability issue.”

Seth Masia (smasia@solartoday.org) is an editor of SOLAR TODAY and director of communications for the American Solar Energy Society.

CORRECTION – Originally published in the May/June 2013 Issue
In our Innovators story on Leslie Glustrom, founder of Clean Energy Action (March-April issue), author Seth Masia misrepresented Glustrom’s views on natural gas. She said that the cross-over point, in which renewable energy sources become cheaper than coal, is now. We regret the error.