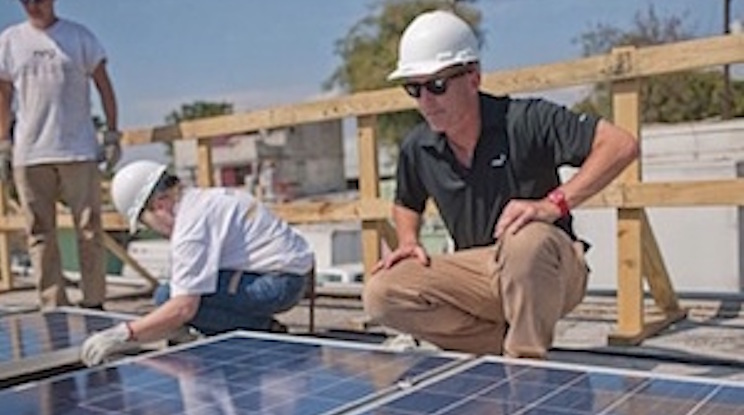 In July, a volunteer team traveled to Haiti to install a 100-kilowatt (kW) solar array, with a 14,000 amp-hour battery bank, to provide continuous power for the Hospital Bernard Mevs, one of the nation’s only trauma, critical care and rehabilitation hospitals. Funding was provided by the Clinton Foundation, NRG Energy and by contributions from
SMA, Unirac, Trina and Sunora Energy.

The 15-person crew consisted of eight employees from developer NRG, four from the design-construction firm Sunora, t
wo from SMA and one from Unirac. They worked in two shifts for two weeks and commissioned the array on July 15.

Unirac engineered a racking system that bridges several concrete roofs, shading the courtyards between them that are used for patient care.

Three design challenges had to be met: The system had to span several rooftops and it had to be erected without disrupting the operations of a hospital that uses every open space to house and treat patients. And the Sunora group also had to separate out the specific loads to be carried by the emergency system.

Unirac’s solution to bridging the buildings was its Solarmount Evolution design, attached to the concrete roof surfaces with epoxy-adhesive anchors. Clamped to the rack are 441 Trina TSM-270 modules. They feed 192 Rolls Surrette 2KS33PS 2-volt batteries, arranged in eight 48-volt strings. The bank can provide 706 amps for 20 hours.

Power is managed by a gang of SMA-4000-US, SMA-6000W-US and SMA-7000W-US inverters, plus a pair of SMA-6048U Sunny Island microgrid controller-inverters, each of which can provide 4 kW of continuous power at 120 volts.

The system now provides the “always on” power needed to protect sensitive medical equipment from power surges or outages and offsets most of the diesel-fueled emergency backup generation.

In partnership with the Clinton Foundation, NRG has previously built solar arrays to power a fish farm, a drip irrigation system and 20 schools. — SETH MASIA