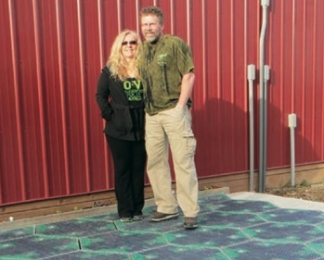 Scott Brusaw first imagined “electric roads” as a little boy, and the idea stuck with him. He and his wife Julie—who first met when they were four and three, respectively—have spent countless hours discussing the benefits of using roadways for something besides a driving surface.

In 2006, they founded Solar Roadways (solarroadways.com) and began to share their vision with the rest of the world. The idea is to replace asphalt and concrete surfaces exposed to the sun with a product that can generate electricity, melt snow, and provide lighting.

The Solar Roadways product is modular and incorporates photovoltaics to generate electricity, LEDs for lighting and messaging, and a textured tempered glass slip-resistant surface. The Brusaws are starting with smaller installations like sidewalks, driveways, and parking lots to refine the product and its performance before moving on to streets and highways.

They’re off to an impressive start. In 2009 they received a $100,000 Small Business Innovation Research (SBIR) grant from the Federal Highway Administration, an agency of the U.S. Department of Transportation, to build the first Solar Road Panel prototype. In 2010, they won a $50,000 community award through General Electric’s Ecomagination challenge that helped support their research and development. In 2011, a $750,000 SBIR grant enabled them to develop a prototype solar parking lot on their property.

In 2014, they launched a crowdfunding campaign. Over the next two months, more than 48,000 people—an Indiegogo record—gave a total of more than $2.2 million in support of Solar Roadways. The final total far surpassed the original goal of $1 million.

Their increasingly high profile has provoked a backlash of skepticism and even occasional hostility. Given that tens of thousands of people found the concept compelling enough to invest in and that the Brusaws aren’t showing signs of backing off in response to the skeptics, I’m guessing we’ll be hearing more about Solar Roadways.